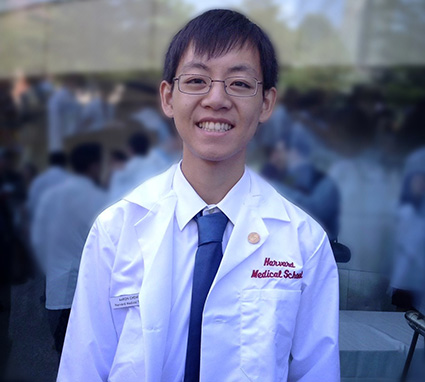 “I don’t remember when I was diagnosed with beta thalassemia major (also known as Cooley’s anemia), but my parents tell me I was around one year old,” said Aaron Cheng. “I’ve been under treatment for as long as I can remember. Every three weeks, I receive a blood transfusion to maintain my level of healthy red blood cells.”

“Another part of treatment involves taking iron chelation medication to treat iron overload, which results from the transfusions. From infancy until the end of middle school, four times a week I would have to inject a drug called deferoxamine into my body. These injections, placed under my skin, would last for about eight hours each night. Now, instead of daily injections, I take a new oral medicine called deferasirox that I can take every night, which makes my schedule a lot more flexible. As a college student, I am thankful that treatment is becoming more manageable for people with thalassemia.”

Aaron is now in his senior year at Harvard, studying his passion—biology. Aaron has conducted laboratory research on iron overload and is studying his own disorder. “In the future, I would like to incorporate biomedical research and patient care in my career as a physician,” says Aaron. Aaron also devotes time to getting involved in activities of the Cooley’s Anemia Foundationexternal icon, an organization dedicated to providing services for people with thalassemia.

“Maintaining my treatment routine is my top priority. It can be challenging at times, but it’s worth it. The future looks bright, and I’m looking forward to having the opportunity to give back to the thalassemia community.”

CDC would like to thank Aaron for sharing his personal story.