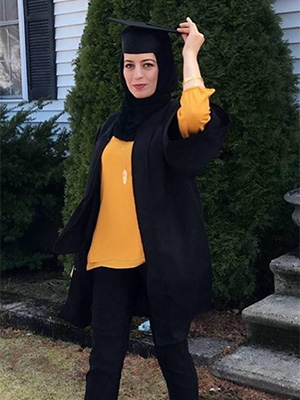 “Thalassemia, and the challenges that accompany it, have helped me become stronger and overcome many difficulties and negative feelings.”  This is the perspective of Noor Altahafee, a young woman who, throughout her life, has coped with the demands of thalassemia, an inherited blood disorder in which the red blood cells aren’t able to get enough oxygen to the tissues and organs in the body.  Noor was born in Mosul, Iraq, and started receiving regular red blood cell transfusions at 5 years of age in order to treat her thalassemia.

Living in Iraq made it difficult for Noor to obtain quality thalassemia care.  The blood bank in Mosul often did not have access to blood testing kits to ensure that donated blood was free of infectious agents such as HIV (human immunodeficiency virus) or the hepatitis B or C viruses. If, when arriving at the hospital for treatment, the blood that was available had not been tested for viruses, Noor’s mother would refuse treatment to prevent Noor from possibly acquiring an infectious disease. Noor would then have to wait and later return to the hospital when blood had been thoroughly tested and deemed safe.

Another serious problem for Noor and other people living with thalassemia in Iraq was that few people had access to chelation medicine, which removes excess iron from the body.  This is important, because one side effect of having frequent transfusions is iron overload.  If left untreated, the excess iron in the body can lead to complications such as heart failure or liver cirrhosis, a condition in which the liver is scarred and permanently damaged. On rare occasions, the chelation medicine called deferoxamine would be available at the local hospital in Mosul.  However, if the medicine was not available, Noor’s mother often had to purchase it through friends who lived in other countries such as Jordan or Syria.   Likewise, it was difficult to obtain the sterile water needed to rehydrate powdered deferoxamine, as well as the needles and syringes needed for administration, because the supply of these materials was so limited.  These products were also purchased through friends in other countries such as Jordan or Syria, when necessary.   Although the medication was expensive, Noor’s family made the sacrifice to get it because they understood that chelation was essential for Noor’s long-term health.

Noor was 10 years old when war broke out in Iraq in 2003. The ongoing bombings and the presence of military checkpoints made it difficult for Noor to attend school and for her father to operate his wholesale cosmetics store. Noor’s mother worked as the Director of Research in the Department of Computer Science at Mosul University, but became increasingly frightened to go to work because of the ongoing war. Noor’s family remained in Mosul while the country was at war for the next 5 years. However, the war made it more difficult than ever for Noor to obtain the red blood cell transfusions and chelation medicine that her life depended on.

Because there were very few resources available to support people with thalassemia living in Iraq, Noor’s mother, Faten Alabbas, helped to establish the Thalassemia Association of Niniva (TAN), based in Mosul, Iraq. Faten served as vice president of TAN for 13 years, and was able, through a partnership with a group in Italy, to establish a thalassemia center in Mosul that included a bone marrow transplant center. Faten hoped that Noor might be cured of thalassemia through a bone marrow transplant. Unfortunately, no one in her family was a close bone marrow match. Faten then reached out to a center in Sardinia, Italy, in search of an unrelated bone marrow donor for Noor. As luck would have it, they identified an individual in the United States who was a 100% match for Noor and who was willing to donate bone marrow. Unfortunately, this potential donor was involved in a car accident shortly thereafter that left him unable to follow through with the donation. When Faten broke the news to Noor, she said, “Do not be sad or upset that this fell through. It is a sign from God. Our plan now will be to focus on providing you with the best possible thalassemia treatment we can find. Who knows what the future holds in store for you.”

Noor and her mother left Iraq in 2014 shortly after a military offensive in Mosul heavily damaged the entire city, including its hospitals and clinics.  Many homes were burned to the ground, including Noor’s grandparents’ home. Noor and Faten escaped by relocating to the Kingdom of Bahrain in the Arabian Gulf.  They sought permanent residence status in Bahrain, but were denied. They then relocated with the rest of their family to Turkey in 2015 and applied for refugee status with the United Nations High Commissioner for Refugees (UNHCR). UNHCR helped Noor’s family move to the United States. The family moved to Massachusetts in 2016 to be near Iraqi relatives who had previously resettled there (including a younger cousin, Dema, who also has thalassemia and was receiving excellent care locally).

Noor is now 26 years old and extremely grateful to be receiving first-rate healthcare from the thalassemia center at Boston Children’s Hospital. “As a person living with thalassemia, feeling that others are helping you and following up on your care gives you more energy to be a productive person.” She is also enjoying the flexibility of the educational system in the United States.  Noor already had an Associate’s Degree in Business from Iraq. Since moving to the United States, she has decided to pursue her dream of working in the healthcare field instead and is now studying to become a dental hygienist.

Since relocating to the United States, Faten has remained in contact with TAN and people with thalassemia and their families in Iraq, providing them with up-to-date information about the latest advances in treatment. Noor has not returned to Iraq since leaving in 2014, but hopes to visit her homeland again someday. She worries about others with thalassemia still living in Iraq. “I hope that we can help them in some way and let them know that they are still on our minds.”

Noor is profoundly indebted to her family, and especially to her mother, for helping her overcome all the struggles she has faced. “After God, my mother is the source of my energy in this life.”

Here are some of Noor’s tips for others living with thalassemia:

CDC thanks Noor for sharing her personal story.