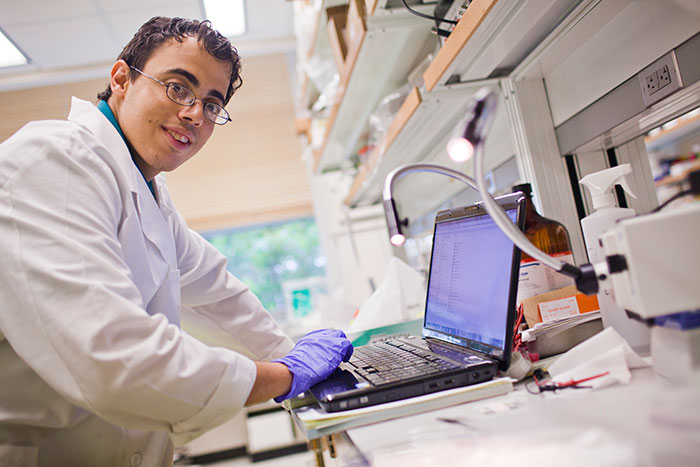 Robert Mannino knows more about blood transfusions than most people. Since he was only six months old, he has spent much of his life in clinics, receiving transfusion therapy for beta-thalassemia. Thalassemia—there are two types known as alpha-thalassemia and beta-thalassemia–are inherited blood disorders. The red blood cells of a person with thalassemia don’t make enough of a protein called hemoglobin, which carries oxygen in the blood to all the parts of the body. Thalassemia is a treatable blood disorder that can be well-managed with

Robert credits his parents with the strength he came to eventually develop in himself to manage his condition. “At the time I was born, we were living in Kansas City. I was initially diagnosed incorrectly as having iron-deficient anemia, but eventually a hematologist, a doctor who specializes in blood disorders, came to the correct diagnosis of beta-thalassemia.” Shortly after this diagnosis, Robert and his family moved to Atlanta. By age 4, Robert was seen routinely at a major children’s hospital in Atlanta by a hematologist with expertise in treating thalassemia. Robert envisions his young parents at the time, struggling to learn all they could about a blood disorder as rare as thalassemia and determining how to find the right care for their son. Ultimately, Robert was fortunate to be seen by the same pediatric hematologist from age 4 to age 22, when he transitioned to a clinic that specializes in the diagnosis and treatment of adults with blood disorders.

Robert credits this consistent, outstanding care with making a vital difference in his life. His pediatric hematologist always encouraged him to ask questions about his condition. “The opportunity to question things led me to better understand thalassemia. This ultimately led to my interest in choosing science as a field of study.”

Now 25 years old, Robert is studying in a biomedical engineering PhD program that is a joint initiative between the Georgia Institute of Technology and Emory University. “I’ve always been interested in science and math,” says Robert. “I’ve spent a great deal of time in the hospital growing up and getting to know others with blood disorders. Now I now want to use my talents to help others.”

Robert’s favorite part of his day is working in the bioengineering hematology lab at the Georgia Institute of Technology. He has just proposed his PhD thesis and spends much of his time on the development of a patient- operated diagnostic tool for home monitoring of anemia (low blood hemoglobin levels). “Eventually, I would like to work for a medical device company, building better products to improve the lives of people with blood disorders,” said Robert.

The challenge of living with thalassemia is something that Robert knows and feels from a lifetime of experience. His busy schedule includes daily chelation therapy with special medicine that removes excess iron from his body, as well as a monthly blood transfusion. Robert also makes time to mentor his younger brother Kevin, who also has beta-thalassemia. He reinforces how crucial it is to stay on track with transfusions and other treatments for thalassemia in order to stay healthy.

Robert shares some of his personal insights about managing thalassemia in the hopes that it will help others. “My personal story is something I would like for others to know. I want people to know that they can turn a blood disorder into a positive experience. For example, having thalassemia has informed me on many of my laboratory projects. From my own experience, I know what the patient needs are and how to address them.”

Robert says that the Cooley’s Anemia Foundation has been there for his family throughout his life. This nonprofit organization, dedicated to serving people with thalassemia, awarded Robert its inaugural Distinguished Scholar Award in 2014. This award is presented to a person who has a severe form of thalassemia who has chosen to pursue postgraduate doctoral-level studies in medicine or science. In addition, that year Robert also received a graduate research fellowship award from the National Science Foundation.

“There’s something different about people who are confronted with challenges, such as thalassemia, Robert says. “We’re driven to do big things.”

CDC thanks Robert for sharing his personal story.