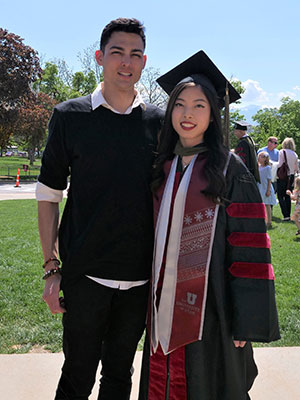 “We are not defined by the obstacles placed in our way, but by how we overcome them.” This is the view of Janelle Trieu, a young woman managing the demands of thalassemia, a blood disorder. Born in Philadelphia to Cantonese parents who immigrated to the United States from Vietnam, Janelle was diagnosed with a severe form of thalassemia at the age of 2. She started receiving blood transfusions shortly thereafter—a treatment regimen she has continued throughout her life. Because her parents were not fluent in English, language was a major barrier for her family when accessing medical care and communicating with healthcare providers. This language barrier proved to have a longer-term impact, when, in adulthood, Janelle realized she still did not have a good understanding of the care that she needed.

Janelle remembers her childhood hematologists (doctors who specialize in blood disorders) as a source of wisdom and practical advice that helped her cope with the demands of managing thalassemia treatment. One of them encouraged her not to view thalassemia as a limitation but to see it instead as a part of the human experience. This gave her a new perspective and allowed her to feel gratitude for the positive things that thalassemia had brought into her life — a strong sense of empathy and a deep appreciation of science and medicine.

Thalassemia also influenced Janelle’s choice of career. During childhood and adolescence, she spent a lot of time in the healthcare system, where she had many pleasant, supportive experiences with her healthcare providers. This influenced her desire to “pay it forward” by finding a job in the healthcare field. She eventually earned a Doctorate in Pharmacy from the University of Utah and is now a licensed pharmacist, working as a Pharmacy Manager in Denver, Colorado.

While studying for her doctorate, Janelle had the opportunity to spend a summer in Armenia, a country in Asia, conducting a survey on treatment adherence among Armenian patients who had chronic health conditions as part of a global health initiative. Adherence to treatment refers to the ability of a patient to follow and maintain a prescribed treatment plan; for people with thalassemia, this generally involves transfusions as well as medications. The findings from her survey were shared with the Armenian Health Ministry to help patients overcome challenges in adhering to treatment and medication regimens. Janelle had her first experiences talking with patients about adherence at health fairs throughout Armenia. In the last year of her doctoral program, she traveled to Thailand to observe the government’s highly effective system for helping HIV patients adhere to their complex treatment regimens. All of these experiences, as well as her own personal struggles with adherence to her thalassemia treatment regimen, gave Janelle greater insight into the factors that impact patient adherence to treatment. These insights have proven to be invaluable in her professional career.

As a pharmacist, Janelle now sees patients with a variety of illnesses who are struggling with medication adherence. She notes that there are many reasons why people may not take their medication and that there isn’t one single solution for overcoming this challenge. “Sometimes, patients simply need a few tips to help with adherence – such as setting an alarm to remind them to take their medicine, using a pill box that separates medication for easier use, or placing the medication in a visible place.  But for patients who are non-adherent for largely emotional reasons, I find that it is helpful to work with them on a more individualized basis instead.” In such cases, Janelle listens to patients and helps guide them toward making the necessary changes to improve adherence, including setting specific, actionable goals. She notes that everyone has to find internal motivation to adhere to treatment. “For me, it was finding a career I was excited about, creating a support system of friends that made me want to thrive, and understanding that my health is in my own hands.” Janelle emphasizes the importance of having a support system. “Before I met fellow patients through the Cooley’s Anemia Foundationexternal icon, I felt alone and helpless,” she says. “But after meeting many other people with issues similar to mine, I felt empowered to take better care of myself.”

Now in her mid-20s, Janelle finds that she still struggles to remain adherent at times. “I think my life with thalassemia will be an ongoing journey with periods where I’m not struggling, followed by periods where I am struggling. Sometimes those struggles are internal – such as when I’m failing at adherence, and sometimes the struggles are external – such as now when I’m struggling with the transition to adult care.” Like many young adults with thalassemia who eventually transition from pediatric to adult care centers, Janelle found it difficult to learn a new healthcare facility and figure out the world of health insurance on her own while also living on  her own for the first time. During this difficult time, she was less adherent to her medications, but she was eventually able to get back on track. A recent move to a new state presented new challenges as Janelle struggled to find new medical providers.  She constantly reminds herself to speak up for herself and reach out to her friends and family for support.

Here are some of Janelle’s tips for others living with thalassemia:

CDC thanks Janelle for sharing her personal story.