Mosquitoes with Wolbachia for reducing numbers of Aedes aegypti mosquitoes 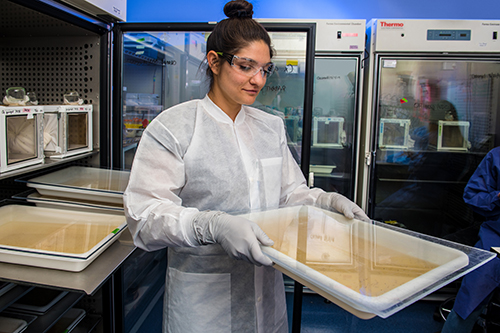 Entomologist checks on mosquito larvae being raised in a laboratory.

Wolbachia (wohl-bach-ee-uh) is a common type of bacteria found in insects. Approximately 6 in 10 of all types of insects, including butterflies, bees, and beetles, around the world have Wolbachia. Wolbachia bacteria cannot make people or animals (for example, fish, birds, pets) sick.

Mosquitoes with Wolbachia are not genetically modified.

How mosquitoes with Wolbachia are used to control Ae. aegypti mosquitoes

How scientists “make” mosquitoes with Wolbachia

Using mosquitoes with Wolbachia may be more effective if used along with other mosquito control methods as part of an integrated mosquito management (IMM) approach, including:

Mosquitoes with Wolbachia and the environment

Mosquitoes with Wolbachia do not harm animals

EPA’s EUP for use of mosquitoes with Wolbachia