On November 20, 2020, this report was posted online as an MMWR Early Release.

Gatherings present an opportunity for rapid spread of COVID-19.

The impact of gatherings as a source of virus transmission underscores the importance of reducing the number of attendees at gatherings, using face masks, and encouraging physical distancing to prevent ongoing transmission of SARS-CoV-2. Furthermore, these findings demonstrate the rationale for consistent mitigation measures across states. 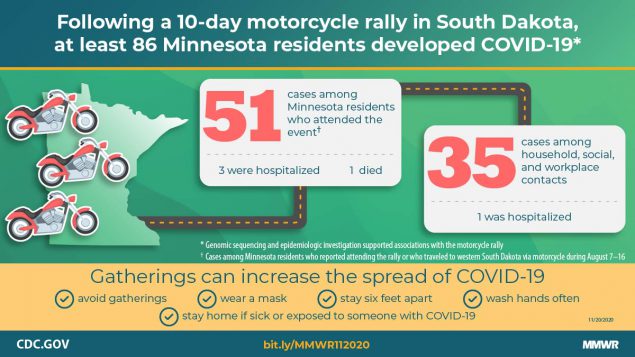 During August 7–16, 2020, a motorcycle rally was held in western South Dakota that attracted approximately 460,000 persons from across the United States to numerous indoor and outdoor events over a 10-day period. During August–September 2020, the Minnesota Department of Health (MDH) investigated a coronavirus disease 2019 (COVID-19) outbreak associated with the rally in Minnesota residents. Fifty-one primary event-associated cases were identified, and 35 secondary or tertiary cases occurred among household, social, and workplace contacts, for a total of 86 cases; four patients were hospitalized, and one died. Approximately one third (34%) of 87 counties in Minnesota had at least one primary, secondary, or tertiary case associated with this rally. Genomic sequencing supported the associations with the motorcycle rally. These findings support current recommendations for mask use, physical distancing, reducing the number of attendees at gatherings, isolation for patients with COVID-19, and quarantine for close contacts to slow the spread of SARS-CoV-2 (1). Furthermore, although these findings did not capture the impact of the motorcycle rally on residents of other states, they demonstrate the rationale for consistent mitigation measures across states.

On August 21, 2020, MDH identified confirmed COVID-19 cases in persons who reported attending the motorcycle rally in the neighboring state of South Dakota. A primary, event-associated case was defined as an illness in a person who reported attending the rally or who traveled to western South Dakota by motorcycle during August 7–16 and who had symptom onset or specimen collection before August 30 (within 14 days after the end of the rally). Reverse transcription–polymerase chain reaction testing for SARS-CoV-2, the virus that causes COVID-19, was used to confirm cases. All confirmed cases among Minnesota residents were reported to MDH. MDH or local public health department staff members interviewed patients with confirmed SARS-CoV-2 infection to identify exposures and persons who might have been in contact with patients during their infectious period (2 days before through 10 days after symptom onset).* To assess exposures, interviews included questions about travel and being in specific settings, such as bars or restaurants, schools, health care facilities, or events or social gatherings in the 14 days before symptom onset. During August–September 2020, MDH and local health department staff members interviewed >80% of patients with a confirmed SARS-CoV-2 infection.

To investigate genomic similarity among COVID-19 cases, available SARS-CoV-2 RNA-positive clinical specimens were obtained from clinical laboratories, and whole genome sequencing was conducted at the MDH Public Health Laboratory on 38 specimens using previously described methods (2). Phylogenetic relationships, including distinct clustering of viral whole genome sequences, were inferred based on nucleotide differences via IQ-TREE† using general time reversible substitution models (3) as a part of the Nextstrain§ workflow (4). This activity was reviewed by CDC and was conducted consistent with applicable federal law and CDC policy.¶

This investigation identified 86 cases, including 51 (59%) primary event-associated cases,** 26 (30%) confirmed secondary and tertiary cases, and nine (10%) likely event-associated secondary or tertiary cases. Four patients were hospitalized, and one died (Table). The median interval between specimen collection and interview was 3 days (range = 1–13 days). Overall, 64 (74%) patients were symptomatic, including 39 (76%) of 51 patients with a primary case and 25 (71%) of 35 patients with secondary and tertiary cases. Among patients with primary cases and symptom onset after the start of the rally, onset dates ranged from August 8 to August 26 (Figure 1). Two patients reported symptom onset before the event and attended the rally during their infectious period. Among primary patients, the median age was 44 years (range = 26–76 years), and 31 (61%) were male. Sixteen (33%) of 48 interviewed patients reported working while infectious, including five who worked at the rally and four who worked in health care after returning from the rally.

Among the 35 patients with confirmed or likely event-associated secondary/tertiary COVID-19, 25 (71%) were symptomatic, with symptom onset dates during August 12–29 (Table). The median age was 32 years (range = 1–83 years), and 13 (37%) were male. Fifteen (43%) persons with secondary or tertiary COVID-19 were household contacts of a person with a primary or secondary infection, 12 (34%) were social contacts, and eight (23%) were workplace contacts. Secondary transmission from this rally occurred via two workplace outbreaks, one wedding outbreak, and one funeral outbreak. Approximately one third (34%) of Minnesota’s 87 counties had at least one primary, secondary, or tertiary case associated with this rally.

Eighty-six Minnesota COVID-19 cases were associated with the South Dakota motorcycle rally; approximately one third of counties in Minnesota reported at least one case epidemiologically linked to this event. These findings highlight the far-reaching effects that gatherings in one area might have on another area. The motorcycle rally was held in a neighboring state that did not have policies regarding event size and mask use, underscoring the implications of policies within and across jurisdictions. The findings suggest that this rally not only had a direct impact on the health of attendees, but also led to subsequent SARS-CoV-2 transmission among household, social, and workplace contacts of rally attendees upon their return to Minnesota. Whole genome sequencing results supported the finding of secondary and tertiary transmission associated with this rally.

The findings in this report are subject to at least three limitations. First, despite in-depth epidemiologic investigation, the findings represent an underestimate of the motorcycle rally’s impact in Minnesota and did not capture the impact within South Dakota or other states. Case interviews were voluntary, and patients could choose not to respond to certain questions. Ten patients reported having close contacts but refused to disclose additional details regarding these contacts. Therefore, it was not possible to identify all contacts of patients who attended the rally. Second, attendees and their contacts might not have been tested for SARS-CoV-2. Two rally attendees indicated that their contacts had COVID-19–like symptoms but did not plan to be tested. As such, the findings underrepresent the number of cases, close contacts, and secondary and tertiary cases. Finally, only 52 specimens were received at the MDH Public Health Laboratory because many testing laboratories do not retain or store specimens long-term. Among these specimens, only 38 were successfully sequenced. The lack of whole genome sequencing data from all cases hindered establishment of complete genetic relatedness for epidemiologic investigation.

A large event in a neighboring state triggered chains of SARS-CoV-2 transmission within Minnesota. Other studies have shown that chains of transmission associated with gatherings are not uncommon within the United States (5,6). Despite underascertainment of the rally’s full impact in Minnesota and other states, these findings highlight the importance of reducing the number of attendees at gatherings and emphasizing mask use, physical distancing, isolation for patients with COVID-19, and quarantine for close contacts as strategies for reducing the spread of COVID-19. Furthermore, these findings demonstrate the rationale for consistent mitigation measures across states.

* The infectious period was estimated to begin 2 days before symptom onset and end 10 days after symptom onset, according to CDC guidance. https://www.cdc.gov/coronavirus/2019-ncov/php/contact-tracing/contact-tracing-plan/investigating-covid-19-case.html.

** One patient reported attending the rally but refused interview. Two additional patients who refused to be interviewed were identified as having attended the rally through secondary case interviews in which other patients reported them as primary event-associated contacts.

†† Close contact was defined as being within 6 feet of a patient with laboratory-confirmed COVID-19 infection for ≥15 minutes. https://www.cdc.gov/coronavirus/2019-ncov/php/contact-tracing/contact-tracing-plan/contact-tracing.html.

§§ Although the specimen from this patient was obtained, sequencing was incomplete.

FIGURE 1. Date of symptom onset among symptomatic patients with primary,* secondary,† and tertiary§ COVID-19 (N = 64) associated with a motorcycle rally in a neighboring state — Minnesota, August 2020

* Laboratory-confirmed SARS-CoV-2 infection in a person who attended the motorcycle rally or traveled to western South Dakota by motorcycle during August 7–16 and had symptom onset or specimen collection within 14 days of the end of the rally.

† Genetic divergence based on nucleotide difference is indicated by length of branches in substitutions per site. Available specimens include specimens from clinical labs where specimens could be retrieved and RNA could be extracted.