Cases of congenital syphilis are increasing in the United States and often represent missed opportunities for prevention.

Provider and public health systems play a critical role in preventing congenital syphilis through screening and treating pregnant women for syphilis; these systems need to be maintained and strengthened. 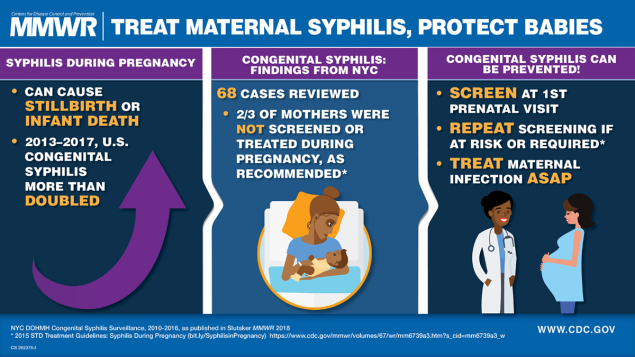 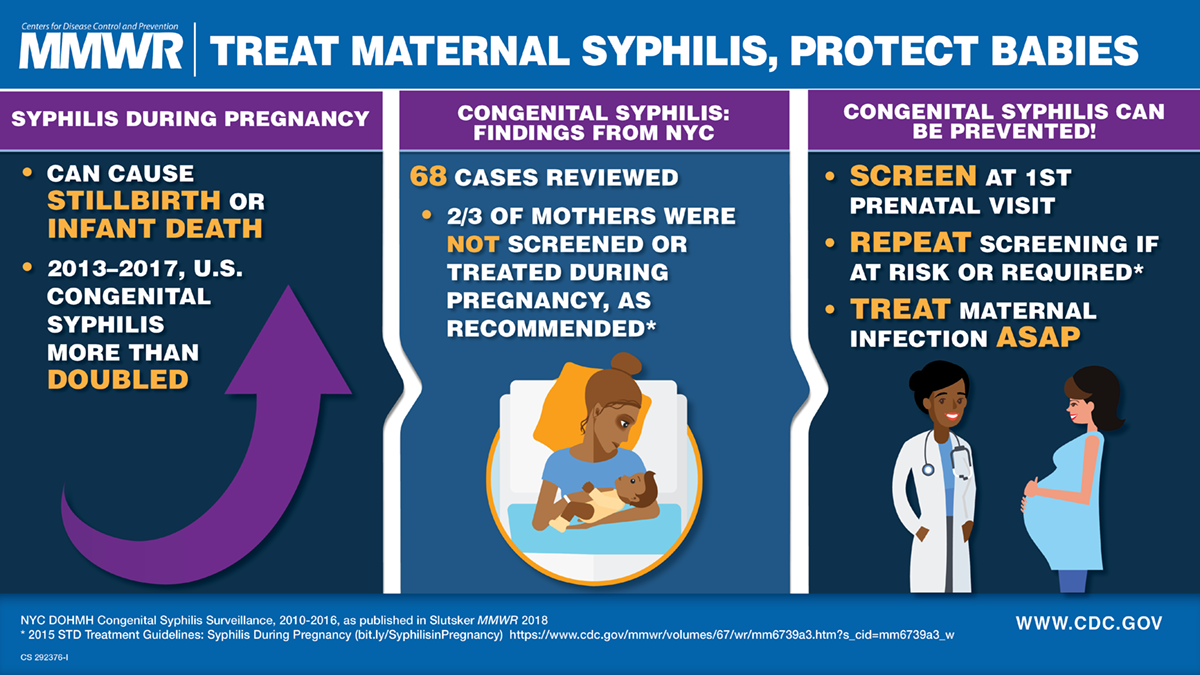 The 2009 U.S. Preventive Services Task Force (USPSTF) Recommendation Statement† and 2015 CDC Sexually Transmitted Disease Treatment Guidelines recommend serologic syphilis screening for all women at first prenatal care visit and additional testing at 28–32 weeks’ gestation and at delivery for women at high risk (4). Whereas the USPSTF outlines specific groups which might be considered at high risk and recommended for testing during third trimester and at delivery (i.e., uninsured women, women living in poverty, sex workers, illicit drug users, women diagnosed with another sexually transmitted disease, and other women residing in communities with high syphilis morbidity), CDC recommends additional screening for “communities and populations in which the prevalence of syphilis is high and for women at high risk for infection” (4). New York State mandates syphilis screening at the first prenatal care examination§ and at delivery (5) and recommends repeat testing throughout pregnancy for women at high risk.¶ In NYC, the Health Code requires electronic reporting of reactive syphilis tests, as well as an indicator of pregnancy (known or probable). Women with reactive syphilis serologic tests who are known or suspected to be pregnant are the highest priority for investigation and are monitored throughout pregnancy.

Among these 68 mothers, 21 (30.9%) did not receive prenatal care or a syphilis test ≥45 days before delivery (Figure). Although DOHMH does not routinely record the reason why pregnant women with syphilis do not access prenatal care, 16 (76.2%) of 21 women had documented obstacles to accessing health care, such as substance use, mental health disorders, recent arrival in the United States, or unstable housing. During case investigation, five (23.8%) women cited lack of health care coverage as a reason for not seeking prenatal care.

Four (5.9%) of the 68 women received timely prenatal care but were not tested for syphilis ≥45 days before delivery (Figure). Investigation revealed informatics errors as the reason two of these women were not screened (e.g., syphilis serologies were not included when programming a prenatal “lab order set” into a new laboratory ordering system). These errors occurred in different health systems. One of these women’s infant died shortly after birth.

Among the 68 women, 22 (32.4%) had a time-appropriate, nonreactive test and subsequently acquired syphilis during pregnancy (Figure). Among these women, 15 (68.2%) did not have a documented syphilis test during the early third trimester (Figure), including 12 (80.0%) who had at least one characteristic indicating risk for syphilis: 10 lived in a high-morbidity neighborhood,†† 11 resided in a high-poverty neighborhood,§§ one received a diagnosis of chlamydia during pregnancy, and two had syphilis before pregnancy. One woman who had a nonreactive test in the second trimester was not screened again until delivery, despite being seen in an emergency department with syphilis symptoms during the third trimester; her infant was stillborn.

Approximately 88% of syphilis infections among NYC women noted to be pregnant during 2010–2016 did not result in congenital syphilis, presumably because of early screening and treatment, underscoring the critical role that provider and public health systems play in preventing congenital syphilis. Nevertheless, 68 congenital syphilis cases were reported during this period, and analysis of these cases provides insight into factors contributing to these preventable infections.

In approximately one third of congenital syphilis cases, the major contributing factor was late initiation of prenatal care; lack of health care coverage was often cited by patients as a barrier to seeking care. Citywide in 2015, 83.2% of new mothers initiated prenatal care during the first trimester,¶¶ reflecting the expanded health insurance options available to pregnant women in New York, regardless of immigration status, through Medicaid and the New York health insurance marketplace.*** Absent or late prenatal care among mothers of infants with congenital syphilis suggests that pregnant women with syphilis might be unaware of available services or face barriers to obtaining prenatal care; this might be particularly applicable for women born outside the United States.

CDC identified improvement of electronic medical records as an essential area for reversing increases in congenital syphilis.††† This investigation found two women with timely prenatal care who were not screened for syphilis because of errors in electronic systems, one of whose pregnancy resulted in an infant death. These cases emphasize the importance of data system functionality, such as clinical decision support tools and automated ordering of prenatal laboratory test panels aimed at ensuring syphilis screening in early pregnancy.

Testing all pregnant women early in pregnancy and retesting women at high risk at 28–32 weeks’ gestation and at delivery is recommended by CDC (4) and the USPSTF. In this investigation, few mothers of infants with congenital syphilis who acquired syphilis after an initial nonreactive test were screened in the early third trimester, despite that most (80%) could be considered at increased risk for syphilis. This finding points to the need for local guidance and provider training regarding characteristics that indicate a high risk for infection and a need for third-trimester screening. To encourage early detection of syphilis in pregnant women, some states have mandated screening at the first prenatal care examination and during the early third trimester. Universal third-trimester screening effectively prevented most congenital syphilis cases in Florida and Louisiana (6); however, this strategy might not be cost-effective in low-morbidity areas (7).

Finally, only two cases met the definition for a confirmed case or syphilitic stillbirth. Among probable cases, most met the surveillance definition solely by maternal criteria and had minimal signs of disease. These cases highlight the challenges inherent in both defining and diagnosing congenital syphilis. The surveillance definition for congenital syphilis intentionally values sensitivity at the expense of specificity, with the goal of maximizing identification of infants potentially infected with syphilis, an important compromise given that the laboratory and radiologic tests required for diagnosis might not be collected, and infants might be asymptomatic at birth (8).

The findings in this report are subject to at least two limitations. First, data came from DOHMH’s surveillance registry, and some are missing or incomplete. Second, NYC has a relatively small number of congenital syphilis cases§§§ and a syphilis epidemic that is largely driven by men who have sex with men (9), and results might not be generalizable to other jurisdictions.

Although no sustained increase in congenital syphilis occurred in NYC during 2010–2016, analysis of 68 cases identified areas where prevention measures might be enhanced. Syphilis screening during pregnancy is critical to preventing congenital syphilis. Health care systems can support screening by ensuring that syphilis tests can be electronically ordered, tracked, received, and flagged for review when results are missing or reactive. In addition, clear guidance regarding third-trimester screening could help identify and treat pregnant women who acquire syphilis during pregnancy.

† The 2009 USPSTF recommendation statement (Grade A) recommended screening all pregnant women for syphilis at the first prenatal care visit. The recommendation included an additional consideration to test women at high risk for syphilis again during the third trimester and at delivery and specifies groups at increased risk as uninsured women, women living in poverty, sex workers, illicit drug users, women diagnosed with another sexually transmitted disease, and women residing in communities with high syphilis morbidity. https://www.uspreventiveservicestaskforce.org/Page/Document/ClinicalSummaryFinal/syphilis-infection-in-pregnancy-screening. The 2018 USPSTF reaffirmation statement recommends screening all pregnant women “when they first present to care” and includes a consideration to rescreen women at high risk for syphilis in early third trimester and at delivery. In the 2018 recommendation, women at high risk include “those living in communities or geographic areas with higher prevalence of syphilis, those living with HIV, and those with a history of incarceration or commercial sex work.” https://www.uspreventiveservicestaskforce.org/Page/Document/RecommendationStatementFinal/syphilis-infection-in-pregnancy-screening1.

¶ New York State recommends repeat testing throughout pregnancy for women at high risk, including patients in “communities and populations with high syphilis prevalence or for patients at high risk.” https://www.health.ny.gov/diseases/communicable/syphilis/treatment_guidelines/ guidelines.htm.

** During 2010–2016, cases of congenital syphilis were categorized in accordance with the Council of State and Territorial Epidemiologists case definitions. https://wwwn.cdc.gov/nndss/conditions/congenital-syphilis.

§§ Neighborhood poverty categories were assigned in alignment with local area-based poverty guidelines. Pregnant women were defined as living in a high poverty neighborhood if they resided in a zip code tabulation area that was categorized as having high or very high poverty. https://www1.nyc.gov/assets/doh/downloads/pdf/epi/epiresearch-SES-measure.pdf.

¶¶ Data on health insurance coverage and prenatal care come from the Pregnancy Risk Assessment Monitoring System, an ongoing population-based survey of new mothers in NYC designed to monitor maternal experiences and behaviors before, during, and after pregnancy. These data are representative of NYC resident women who had a live birth in 2015.

††† Ensuring that electronic medical records support syphilis screening is included in CDC Call to Action: Let’s Work Together to Stem the Tide of Rising Syphilis in the United States. https://www.cdc.gov/std/syphilis/syphiliscalltoactionapril2017.pdf.

Abbreviation: STI = sexually transmitted infection.
* Area-based poverty level categories are based on the percentage of the population in each zip code tabulation area with a household income below the poverty threshold set by the federal government. In alignment with local area-based poverty guidelines, five-year American Community Survey poverty data from 2011 to 2015 were used to divide zip code tabulation areas into four categories indicating the percentage of residents living below the federal poverty limit: low (<10 %), medium (10 to <20%), high (20% to <30%), and very high (≥30%). Pregnant women were assigned to a zip code tabulation area based on zip code of residence at the time of reporting.
† Calculation of the percent of pregnant women by country of birth excludes women for whom country of birth was unknown.
§ Calculation of the percentage of pregnant women by syphilis stage excludes two pregnant women who did not meet the maternal criteria for reporting a congenital syphilis case. CDC case definitions were used to assign a syphilis stage to each pregnant woman (https://wwwn.cdc.gov/nndss/conditions/syphilis/case-definition/2018/).
¶ STIs reported before pregnancy include confirmed cases of syphilis (all stages), chlamydia, and gonorrhea reported to the New York City Department of Health and Mental Hygiene before each pregnant woman’s estimated last menstrual period.
** STIs reported during pregnancy include confirmed cases of chlamydia reported to the New York City Department of Health and Mental Hygiene between each pregnant woman’s estimated last menstrual period and delivery date. No pregnant woman in this investigation was reported with gonorrhea during this time.

Abbreviations: CS = congenital syphilis; CSF = cerebrospinal fluid; VDRL = venereal disease research laboratory nontreponemal serologic syphilis test; WBC = white blood cell.
* The probable CS case definition includes infants with clinical findings suggesting CS (infant criteria), infants born to women who received a diagnosis of syphilis during pregnancy and did not initiate penicillin-based treatment ≥30 days before delivery (maternal criteria), or both. Clinical signs of CS included are the indicators outlined in the infant/child criteria for reporting a CS case (https://wwwn.cdc.gov/nndss/conditions/congenital-syphilis/).
† One confirmed case of CS in an infant who later died and one syphilitic still birth are excluded from this table.