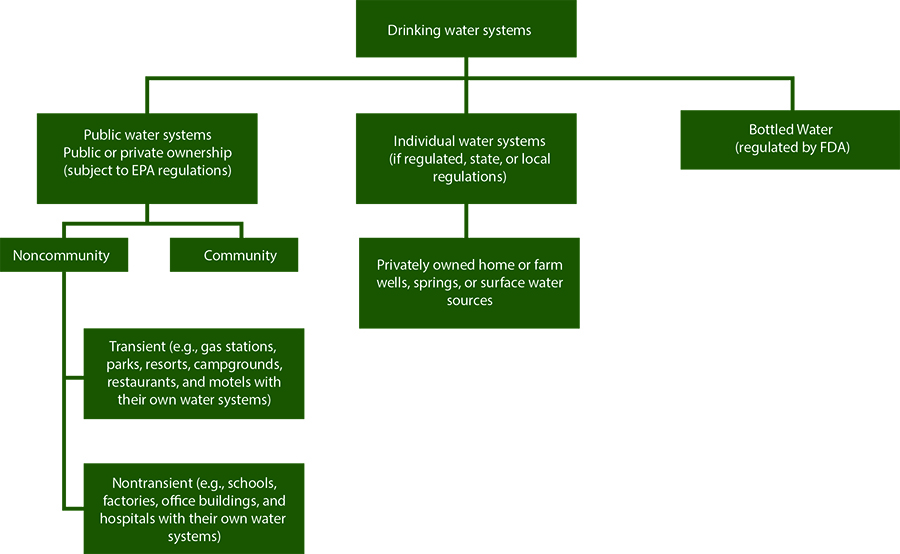 The Safe Drinking Water Act (SDWA) of 1974 and its subsequent 1986 and 1996 amendments authorize the EPA to set national standards to protect public drinking water and its sources against naturally occurring or human-made contaminants 1-3. SDWA standards include health-based maximum levels for microbiologic, chemical, and other contaminants in drinking water. They also include water treatment performance criteria for removing or inactivating contaminants (Table 1). If needed, EPA can issue guidance or a health advisory instead of a regulation.

Additional rules that protect against exposure to waterborne pathogens include the 1989 Surface Water Treatment Rule (SWTR) pdf icon[PDF – 57 pages]external icon and its amendments 1-9, and the 2013 Revised Total Coliform Rule.

The surface water treatment rule and amendments specify water-treatment techniques (for example, filtration and disinfection), monitoring, and performance criteria for systems that use surface water sources to protect against Giardia and Cryptosporidium contamination. EPA has granted waivers from the filtration requirement to some water systems. EPA has established criteria to assess whether ground water sources are under the direct influence of surface water. If so, these systems must meet provisions of the treatment rule and amendments.