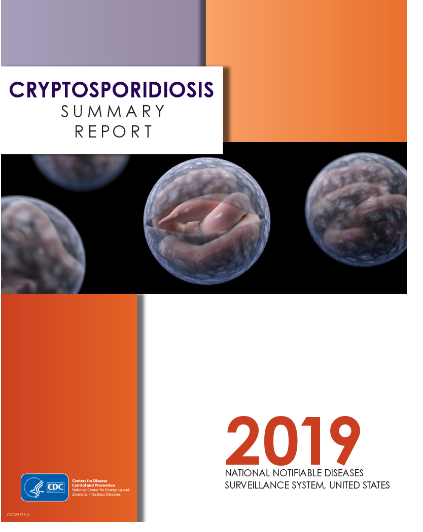 Cryptosporidiosis is a gastrointestinal illness caused by protozoa of the genus Cryptosporidium, the leading cause of U.S. waterborne disease outbreaks (1) and the third leading cause of U.S. zoonotic enteric illness (2). An estimated 823,000 cryptosporidiosis cases occur annually; this means <2% of cases are nationally notified (3). Cryptosporidium infection can be symptomatic or asymptomatic. Immunocompetent patients can experience frequent, non-bloody, watery diarrhea typically lasting up to 2–3 weeks (4). Additional symptoms can include vomiting, nausea, abdominal pain, fever, anorexia, fatigue, and weight loss. Immunocompromised patients can experience profuse watery diarrhea lasting weeks to months or even life-threatening malnutrition and wasting.

Cryptosporidiosis is a nationally notifiable disease; the first full year of reporting was 1995. National data are collected through passive surveillance. Healthcare providers and laboratories that diagnose cryptosporidiosis are mandated to report cases to the local or state health department. The 50 state, District of Columbia (DC), New York City (NYC), and territorial public health agencies, in turn, voluntarily notify CDC of cases via the National Notifiable Disease Surveillance System (NNDSS). Some states conduct enhanced molecular surveillance of cryptosporidiosis through participation in CryptoNet; CryptoNet data are not presented here.

A probable case of cryptosporidiosis is defined as 1) having supportive laboratory test results for Cryptosporidium spp. infection using a screening test method, such as immunochromatographic card or rapid card test, or a laboratory test of unknown method or 2) meeting clinical criteria (i.e., diarrhea and one or more of the following: diarrhea duration of >72 hours, abdominal cramping, vomiting, or anorexia) and being epidemiologically linked to a confirmed case.

A suspect case is defined as having a diarrheal illness and being epidemiologically linked to a probable case. Cases not classified as confirmed, probable, or suspect are classified as unknown.

National cryptosporidiosis surveillance data for 2019 were analyzed using R version 4.0.3. Data cleaning processes included case deduplication and the verification of case status (confirmed, nonconfirmed). Numbers, percentages, and incidence (cases per 100,000 population) of cryptosporidiosis were calculated in aggregate for the United States and separately for each reporting jurisdiction. Incidence was calculated by dividing the number of cryptosporidiosis cases by mid-year census estimates (5) and multiplying by 100,000. U.S. Census Bureau data were obtained using their Application Programming Interface and the R censusapi package (6–7). In addition to analyzing data nationally and by reporting jurisdiction, data were analyzed by region (Northeast, Midwest, South, and West regions), as defined by the U.S. Census Bureau (8). To account for differences in the seasonal use of recreational water, the West region was further subdivided into Northwest and Southwest.

To examine reporting over time, cryptosporidiosis incidence was calculated by year (2010–2019) and case status. Average annual cryptosporidiosis incidence was calculated by demographic variables (e.g., age and sex). Incidence was not calculated for race, ethnicity, or month of onset, due to large proportion of missing data for these variables (i.e., 16.4%, 24.9%, and 20.2%, respectively). One case reported by Puerto Rico for 2016 was excluded from analysis, because detailed demographic census data are not available to calculate incidence by age and sex.

The authors thank the Surveillance and Data Branch, Division of Health Informatics and Surveillance, Center for Surveillance, Epidemiology, and Laboratory Services; Office of Public Health Scientific Services, Centers for Disease Control and Prevention for preparing and aggregating state-based NNDSS data for dissemination.

* Cases per 100,000 population per year
§ Probable, suspect, or unknown cases

During the last decade, incidence of cryptosporidiosis has increased 47.2%. This continues a marked increase of 241% since 2004. This increase could be related to increased testing for Cryptosporidium due to increasing use of diagnostic multiplex PCR panels for gastrointestinal illness. This could also reflect true increases in cryptosporidiosis incidence. The consistently increased incidence of reported nonconfirmed cases after 2010 likely reflects changes in the national case definition.

Cryptosporidiosis is geographically widespread across the United States. Although incidence appears to be consistently higher in the northern Midwest states, differences in incidence might reflect differences in risk factors or modes of transmission of Cryptosporidium; the magnitude of outbreaks; or the capacity or requirements to detect, investigate, and report cases. 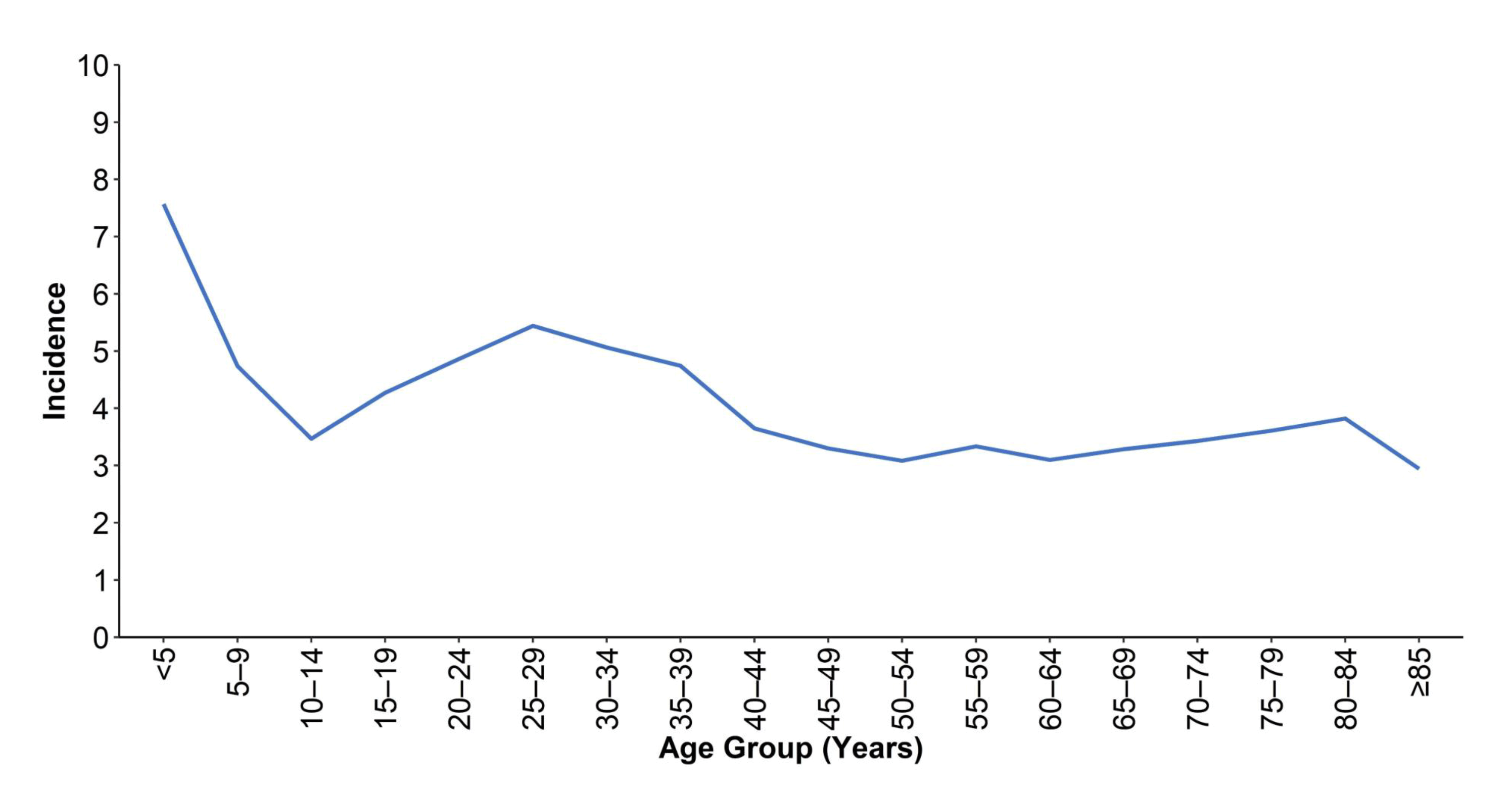 The incidence of reported cryptosporidiosis, by age group, was highest among patients ages <5 years (7.6 cases per 100,000 population), 25–29 years (5.4), 30–34 years (5.1), and 20–24 years (4.9). This might reflect young children becoming infected and ill and their caregivers subsequently becoming infected after changing diapers of young children or helping them with toileting. 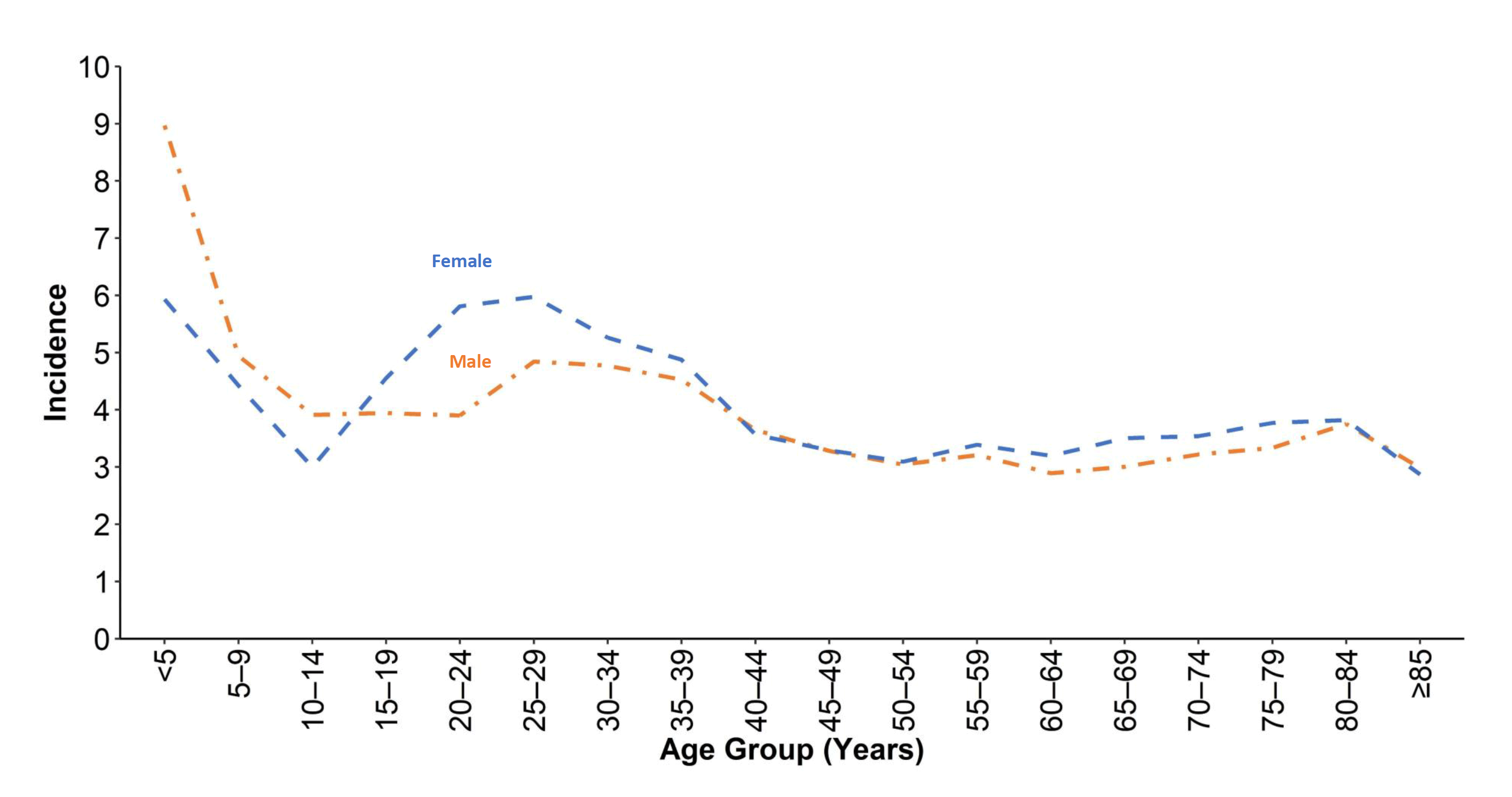 The highest incidence of cryptosporidiosis, by sex and age group, was among males ages <5 years (9.0 cases per 100,000 population) and females ages 25–29 years (6.0 cases per 100,000). Incidence for females were higher than for males for all age groups >19 years, except those 40–44 years and 80–84 years. The incidence is essentially the same for females and males ages 45–54 years. Differences in age-specific incidence might be due to age-specific differences in risk factors or modes of transmission of Cryptosporidium. For example, compared with males, females might be more likely to change diapers of young children or help them with toileting, and thus, more likely to be exposed to Cryptosporidium. Additionally, compared with males, females might be more likely to seek healthcare, and thus, more likely to have illness diagnosed and reported as cryptosporidiosis.

The number of cryptosporidiosis cases was greatest in August (N=1,770) and lowest in February (N=498). The number of cases, by month of symptom onset, reflects seasonal differences in exposure, such as summertime swimming.