Global neglected tropical disease (NTD) programs focus on identifying regions and countries where NTDs are present and working to control or, when possible, eliminate them. CDC works within countries and through regional collaborations to help improve existing NTD interventions, such as mass drug administration (MDA) campaigns.

The World Health Organization’s Global Programme to Eliminate Lymphatic Filariasis (GPELF) was launched in 2000. GPELF aims to stop transmission and alleviate the suffering of those already affected by the disease. In areas with a high number of individuals at risk, anti-parasitic drugs  are given to the entire population once a year for at least five years to stop the spread of infection. Health education efforts is provided lessen the severity and number of leg infections in people already infected who have swollen legs. Expanding the availability of surgery for men with hydrocele due to lymphatic filariasis is also an aim of the program.  The goal set by the most recent WHO road map is to eliminate lymphatic filariasis as a public health problem in at least 58 countries by 2030.

Onchocerciasis, also known as “river blindness”, is a major cause of blindness and skin disease in Africa and the Americas.  For many years, endemic areas have sought to control onchocerciasis using vector control and community mass distribution with the antiparasitic drug ivermectin.  Country-wide elimination of transmission has been verified in four countries: Colombia (2013), Ecuador (2014), Mexico (2015) and Guatemala (2016).  Local interruption of transmission has been demonstrated in multiple countries in Africa and the Americas. The Onchocerciasis Elimination Program for the Americas (OEPA), a regional initiative launched in 1992, has supported onchocerciasis elimination through a partnership with the six endemic countries in the region, Pan American Health Organization (PAHO), CDC and other partners.  In Africa, there have been three WHO programs that have supported countries to develop and implement strategies: the Onchocerciasis Control Programme (OCP (1973-2002), the African Programme for Onchocerciasis Control (APOC) (1995-2015) and the Expanded Special Project for the Elimination of Neglected Tropical Diseases in Africa (ESPEN) (2016-present).  These programs have been able to reach more than 150 million people to markedly reduce blindness and skin disease. Treatment has been able to be stopped for nearly 8 million people who are now longer at risk for onchocerciasis.  The most recent WHO road map sets a goal of achieving country-level verification of onchocerciasis elimination in at least 12 countries in Africa by 2030.

The burden of schistosomiasis in affected communities is measured by identifying areas where many school-aged children infected. Depending on disease prevalence, the drug praziquantel is provided to school-aged children or to the entire community usually as a yearly dose. The medicine kills adult parasites and reduces the severity of the disease. 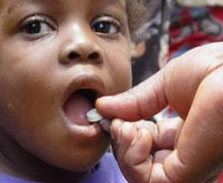 Drug being given to a child during a mass drug administration campaign.

Trachoma is a bacterial infection of the eye, spread from person-to-person by direct contact. Untreated infection causes scarring of the upper eyelid that can lead to blindness; trachoma is the world’s leading cause of preventable blindness. Treatment for trachoma is focused on treating the symptoms and helping to prevent future infection. A major comprehensive public health strategy approved by the World Health Organization, called SAFE, is underway to treat trachoma epidemics in rural Africa and other parts of the developing world. The combination of surgery (S), antibiotics (A), facial cleanliness (F) and environmental educational efforts (E) is a multi-pronged approach to the disease and has shown promising results. A highly effective and safe antibiotic called Zithromax is being utilized to assist in trachoma control.

The global campaign to eradicate Guinea worm disease began in 1980 at CDC.

At that time, 20 countries, mainly in Africa, had approximately 3.5 million human cases of Guinea worm disease each year. In 1986, the World Health Assembly adopted a resolution calling for the eradication of GWD. The global Guinea Worm Eradication Program , led by The Carter Center working with health ministries, CDC, and other global partners, has helped build local, national, and international partnerships that have proven enormously effective.  Today, fewer than 100 human cases occur annually in a handful of African countries, although cases in animals, primarily domestic dogs now outnumber human cases.

Since 2006, the United States Agency for International Development (USAID) has supported 33 developing countries in their efforts to control and eliminate five of the most prevalent NTDs – lymphatic filariasis (LF), trachoma, onchocerciasis, schistosomiasis, and soil transmitted helminths (hookworm, roundworm, and whipworm).

USAID works alongside developing country governments and public- and private- sector partners to map where disease persists, treat at-risk populations, evaluate progress, and build a sustainable in-country response. A hallmark of USAID’s NTD Program is the generous donation of billions of dollars in treatments from pharmaceutical partners. Considered a “best buy” in global health, every $1 invested in NTDs by the U.S. government leverages $26 in donated treatments. As a result of USAID’s investment, hundreds of millions of people live in communities no longer at risk for these diseases.

USAID and CDC work together on a shared agenda to advance global progress towards the control and elimination of NTDs that can be addressed with preventive chemotherapy (such as lymphatic filariasis, onchocerciasis, schistosomiasis, soil transmitted helminths and trachoma). CDC conducts scientific and operational research critical to defining NTD normative guidance for programming, developing disease specific monitoring and evaluation frameworks, and strengthening diagnostics and laboratory tools. CDC has strong working relationships with WHO, regional reference laboratories/bodies, national NTD programs, researchers, and collaborating centers, working with these partners through the provision of unique laboratory, diagnostic, and epidemiological technical assistance to advance programs and operational research.