In 2014, tragedy struck a remote area in Sierra Leone, after an Ebola outbreak crossed over from neighboring Guinea. Due to gaps in the disease surveillance systems, the Ebola virus continued to spread throughout Sierra Leone and into neighboring West African countries. Two years later, when the epidemic was finally stopped, Ebola had claimed nearly 4,000 lives in Sierra Leone and prompted the country to make substantial, sustainable improvements to its disease surveillance system.

Today, Sierra Leone is the first country in the World Health Organization (WHO) African region to fully transform its national disease surveillance system from paper-based to a health facility-level, web-based electronic platform. This change significantly improved disease reporting and tracking throughout the country.

Before the Ebola epidemic, Sierra Leone relied on the Integrated Disease Surveillance and Response (IDSR) system, a paper-based surveillance system used to track local health conditions and report to the district health facility. Unfortunately, IDSR was not available in all health facilities, and reporting was low in the facilities that used it. Weekly counts of disease conditions required verbal transmission to the district health facility. An electronic spreadsheet was used by the national staff to manually enter each district’s data. This manual system was affected by human error and did not meet data reporting expectations.

In 2015, Sierra Leone’s Ministry of Health, with support from the CDC, WHO, and other partners, updated the paper-based IDSR system. They added organized system tools, refined the country-specific disease notification list, and developed standard processes to improve tracking and reporting. In 2016, Sierra Leone and CDC moved away from paper-based surveillance to a web-based electronic IDSR (eIDSR) system that allows district-level officials to enter health facility-level data. This new web-based platform transmits data to the national District Health Information System (DHIS2) database in real-time.

After the successful use of district-level eIDSR, a mobile application (app) was then developed based on DHIS2’s technology. With the app, local health facilities transmitted data directly into the national database, bypassing the need for district-level data entry. Once the app was downloaded onto a tablet at each health facility, it allowed data to be automatically submitted over a mobile network or via text message to the national system without additional entry. When an internet connection was unavailable, the app automatically converted the data into a simpler format, transmitted it to the national system, and converted back to its original format for analysis. The guidelines built into the app help ensure accurate data entry by requiring additional verification if the system “senses” information might be entered incorrectly. 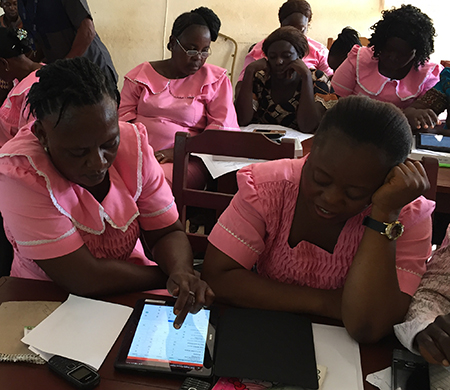 One of the challenges facing the app’s usability was health workers’ limited experience using a smart device. To reduce issues, the developers simplified the design. Workers in local health facilities were already familiar with the paper-based system, so the designers set up the app to mirror the paper form layout. Designers also ensured that system messages used familiar terms.

The mobile app was tested at six health locations before widespread implementation. National rollout of the app included 144 training sessions of more than 2,300 health personnel from over 1,300 health facilities. The updated eIDSR and use of the app improved weekly reporting from less than 40% in 2015 to 99% as of May 2019. The app made it possible to more effectively track 28 priority diseases in every government health facility across the country.

Disease outbreaks pose a serious threat to health security worldwide. Much of a country’s public health relies on its ability to prevent, detect, and respond to rising threats. Sierra Leone has made great improvements by implementing a sustainable and effective surveillance system. This transformation has positioned the country to better protect citizens’ health and well-being and prevent diseases from spreading beyond its borders.