Without strong surveillance and response systems, deadly diseases spread quickly. Ebola overwhelmed the public health system in Sierra Leone when the 2014-2015 epidemic infected more than 14,000 people and took the lives of nearly 4,000 in the country. Since then, the country has made strides to become better prepared to fight infectious diseases. CDC, partners, and Sierra Leone’s Ministry of Health and Sanitation (MoHS) are using experience and knowledge gained from the Ebola outbreak to build a strong emergency management and response system. Ultimately the strength of Emergency Operations Centers (EOC) rests with the leaders who ensure their workforce is trained and skilled. 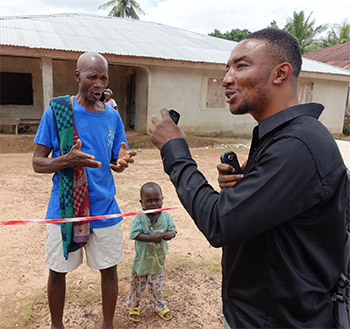 In August 2015, the NERC began transitioning management of future Ebola-related emergency response activities to the MoHS to operate out of the PHNEOC. By January 2016, the MoHS was ready to lead all public health emergencies as well as coordinate with the Office of National Security. “The focus is no longer solely on Ebola, but on other diseases—Sierra Leoneans are putting in place systems to track diseases in every corner of the country,” says Dr. Dafae. These systems share information among the local, district, and national public health levels. “Ebola created a sense of urgency in having coordinated efforts and more established information flow,” adds Dr. Dafae, who leads this effort.

Preventing infectious disease outbreaks also requires regional cooperation. With that in mind, Sierra Leone emergency managers are working with partners in the neighboring countries of Guinea, Liberia, and Uganda to develop systems that can detect and respond to diseases promptly. Thanks to these systems and the health professionals who manage them, Sierra Leone and the region are better positioned to keep people safe and healthy. 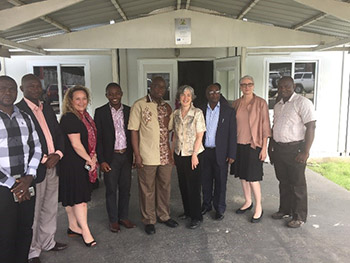 Investing in people builds a strong public health workforce. With this in mind, the MoHS sent the Directorate of Policy, Planning, and Information’s Planning Officer, Mr. Alusine Kamara, to Atlanta for a four-month Public Health Emergency Management (PHEM) Fellowship to learn the logistics, coordination, and operations of an incidence management system.

“Before Ebola, there was no EOC,” says Kamara. He adds, “When Ebola struck, it was a challenge.” Then, when the PHNEOC opened in January 2016, “we were tested immediately with a new case of Ebola in the (Tonkolili) district,” he says. The public health national EOC managed response activities and worked with partners to control the cluster and prevent its further spread quickly. “One thing I have learned in terms of emergency management is making quick decisions and taking quick actions,” because threats like Ebola do not waste time, says Mr. Kamara.

Sierra Leone’s investment in the CDC PHEM Fellowship is already paying off in unexpected ways. Beyond the formal curriculum, Kamara is learning from other fellows, ten of whom are from Africa. He is working closely with three fellows (two from Guinea and one from Liberia) on ways to improve cross-border surveillance and laboratory testing. Kamara looks to a future with an improved public health system when he says, “During the Ebola crisis, we had good collaboration…I see integrating all of the Sierra Leone ministries, as well as the Ebola-affected countries’ MoHs to coordinate efforts to fight diseases across borders.”