In early 2019, Mozambique’s coastline was hit by not one, but two, tropical cyclones. This was the first time in recorded history that two strong tropical cyclones hit the country in the same season. The extent of the destruction and impact took days and even months to fully understand. Strong public health institutions and longstanding partnerships helped to reduce the negative health impacts across the affected areas. 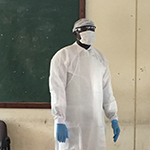 On March 14 and 15, Cyclone Idai struck central Mozambique, leaving a trail of destruction and flooding. Mozambique’s National Institute of Health (INS) was tapped by the Ministry of Health (MOH) to coordinate all surveillance and outbreak response activities. Within 48 hours, a rapid response team arrived on scene to assess the situation and prepare for disease outbreaks. INS promptly established an emergency surveillance system, including laboratory diagnosis. This provided critical information to guide the response and control a massive cholera outbreak in four districts. Early detection of the cholera outbreak and previous experience with cholera immunization were critical for INS to start a rapid response and vaccinate close to a million people within three weeks of the cyclone landing.

“Managing two concurrent responses was an extremely challenging task, and INS’s leadership is a key reason why the health impacts were not more severe. Working with the MOH, INS leveraged its own experts and support from partners to mount a coordinated response,” said CDC Mozambique country director Dr. Alfredo Vergara.

The country’s effective response was the outcome of years of investments by the Mozambican government and its partners towards strengthening INS, the country’s National Public Health Institute (NPHI). Efforts included developing the health workforce, establishing critical surveillance, and enhancing laboratory capabilities.

The value of NPHIs often becomes clear in emergencies, when coordination between national and international partners is necessary. Since 2015, CDC has supported Mozambique’s INS to build upon its strength as an NPHI leader and develop more core public health capabilities. This includes recent One Health program development efforts, which helped build coordinated response and surveillance activities across human, animal, and environmental health sectors.

“The capacities developed at the INS in partnership with CDC, particularly the strengthened surveillance system, were key in the back-to-back emergency responses this year. Without this support, the rapid detection and response to the cholera outbreak would have not been possible,” said INS Director General Dr. Ilesh Jani.

Since 2009, Mozambique has invested in its public health workforce through the Field Epidemiology and Laboratory Training Program (FELTP). This program, managed by INS, has trained more than 45 disease detectives over the past decade.

FELTP graduates around the world are among the first on the scene to investigate, respond, and provide further support for health emergencies. In Mozambique, FELTP training helped the team of responders quickly adapt to the challenges of the emergency response. Mozambique’s INS, Ministry of Health, and other partners vaccinated close to a million people in four districts where a cholera outbreak emerged after Cyclone Idai.
Photo: Adilson Taju, State Department

The strength of Mozambique’s response reflects key involvement from partners like CDC. Across CDC, support came from a variety of groups, including experts in surveillance, response, data management, infectious diseases, and water, sanitation, and hygiene (WASH).

Additionally, CDC helped implement the Early Warning, Alert, and Response System (EWARS), a World Health Organization (WHO) platform to improve outbreak detection in emergencies. INS plans to transition this into a national electronic rapid reporting system, which will sustain the investment and improve the country’s preparedness.

Mozambique’s response to the cyclones demonstrates the value of investing in health systems before disaster strikes. These systems, developed in partnership with strong national public health institutions, are the cornerstones for rapid and effective public health response.