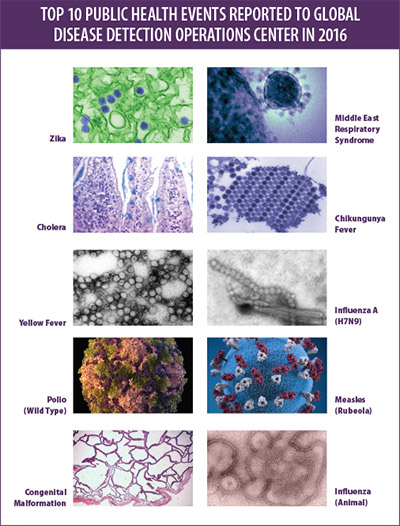 In today’s interconnected world, a disease threat anywhere is a threat everywhere. The public health emergencies following the 2014-16 West Africa Ebola outbreak and the ongoing Zika outbreak in the Americas have demonstrated that public health threats and disease outbreaks are not restricted by geographic boundaries. Yet emergency preparedness and response continues to be very limited in most countries. To help protect Americans from potential health threats, CDC’s Global Disease Detection Operations Center housed in DGHP works 24/7 detecting and monitoring global public health events of international importance and assessing their potential risk to the global community. Over the past 10 years, the GDDOC has been the centralized operations unit for event-based surveillance (EBS) that conducts global disease surveillance; consolidates and shares international outbreak information; systematically conducts risk assessments and reports CDC-wide; and supports and coordinates outbreak response through operational support and funding for rapid deployment of CDC assets and field teams.

Event-based public health surveillance looks at reports from different sources – including traditional channels like hospitals and health departments. Numerous information channels are scanned worldwide, including the web, health-related blogs, and advanced internet text-mining systems, to directly push relevant reports to the detection analysts. The team also scans social media which, in some instances, is the only or earliest source of information for an evolving emergency. This real-time detection enables the team to rapidly bring together experts from around the agency, assess the risk and respond appropriately to health threats before they reach our shores.

Between March 2014 and December 2016, GDDOC tracked more than 300 outbreaks in 160 countries. In 2016 alone, 37 dangerous pathogens were tracked in more than 130 countries. From MERS in the Middle East to yellow fever in West Africa and Zika virus in the Americas, these outbreaks ignited global concern and affected countless lives.

The GDDOC’s team of disease detection analysts are epidemiologists dedicated to tracking and detecting outbreaks across the globe and assessing their potential risk to Americans and people around the world. These individuals work tirelessly to identify and contain threats to our health and national security. 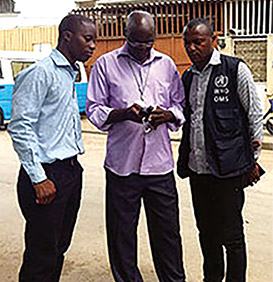 Mozambique FELTP and WHO using GPS for disease detection.

In early January 2016, CDC Angola Country Director contacted the DGHP’s GDDOC in Atlanta to request assistance to determine the cause of an unknown illness, later confirmed to be yellow fever. A month earlier, four men who living and working in Luanda Province in Angola developed the same symptoms and died; the outbreak then spread throughout the province. GDDOC quickly brought together experts from around CDC to investigate the illness. When the Angola Ministry of Health officially requested assistance from CDC, GDDOC rapidly assembled and deployed a response team; the team arrived within two weeks of being contacted about the outbreak. Finding fluent Portuguese speakers and subject matter experts who were available to deploy to Angola on short notice was a major challenge, because a large number of staff were already deployed to support the Zika response.

Despite these challenges faced during the course of the field investigation, GDDOC in collaboration with the Global RRT, deployed over 40 staff members to Angola from across CDC, including overseas staff. Deployed staff included epidemiologists, laboratorians, public health advisors, emergency management specialists, Epidemic Intelligence Service Officers, and CDC locally employed staff. Global RRT responders integrated seamlessly into the response, and took on major roles, including that of WHO Incident Manager.

Yellow fever spread from Luanda to 16 of the country’s 18 provinces; and imported cases were also detected in China, Kenya and the Democratic Republic of the Congo. By the end of the epidemic, Angola had registered more than 800 confirmed cases and 4,400 suspected cases of yellow fever. The last case was reported on June 23, 2016.

In response to the outbreak, a large-scale vaccination campaign was launched and Angolan health authorities and partners immunized 18 million people in 85 high-risk municipalities, representing 70 percent of the target population of approximately 25.7 million people.

The yellow fever outbreak investigation in Angola is one of many field investigations that GDDOC has supported in recent years, and illustrates that with information, expertise, and collaboration from partners within and outside of CDC, swift and effective public health responses can be accomplished anywhere in the world. Rapidly providing CDC technical assistance internationally increases the likelihood of containing disease outbreaks at their source, protecting the world from a potential global pandemic.