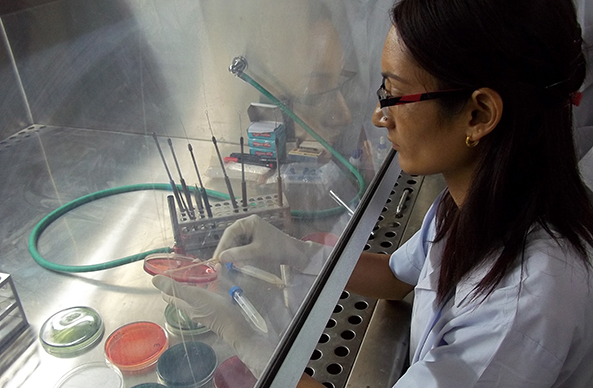 CDC is working internationally to build laboratory capacity so that disease can be identified at the source. Photo: CDC India.

On May 17, 2018, almost two weeks after his brother died of febrile illness, a male patient in his mid-twenties visited a hospital in Kerala, India, with a fever. A day later, he was dead — but not before his doctors noticed his symptoms were consistent with encephalitis.

Recognizing the potential danger, they immediately sent samples from the patient to the Manipal Centre for Virus Research (MCVR), followed by the National Institute of Virology (NIV) in Pune, where laboratory tests identified the cause of death as Nipah virus.

WHAT IS NIPAH VIRUS?

Nipah virus is an emerging infectious disease of public health importance. There is no cure,and it kills about 75% of people it infects. As of June 6, Nipah virus had claimed 16 lives out of 18 laboratory-confirmed cases in Kerala, a case fatality rate of 88.9 percent.

People can get sick with Nipah virus after direct contact with infected bats, pigs, or people. In humans, the infection typically presents as fever, headache, drowsiness, disorientation, or confusion, but can also include respiratory and neurological symptoms.

Because Nipah virus is deadly and can spread between people, it is critical to detect outbreaks rapidly. This means recognizing and reporting symptoms in patients quickly, and making sure laboratories have the ability to confirm the diagnosis. Thanks to recent efforts to strengthen its public health capabilities through the Global Health Security Agenda (GHSA), India was prepared to do just this.

In August 2017, through partnership under GHSA, CDC provided laboratory training to participants from MCVR and NIV. The training was a part of an ongoing GHSA-funded study on hospital-based surveillance of acute febrile illness, giving laboratorians the skills to successfully investigate causes of these diseases and increased the diagnostic capacity of laboratories. CDC shared technical expertise, specific reagents, and training for diagnosis of dangerous viruses including Nipah virus and Crimean-Congo hemorrhagic fever through next-generation sequencing (NGS) analysis.
Less than one year later, scientists at MCVR used those skills, including NGS, to detect Nipah virus as the pathogen responsible for the outbreak and identified the exact strain of the virus. This early detection, completed for the first time in India rather than at CDC headquarters, paved the way for state and central governments to respond to the Nipah virus infections more quickly than in previous outbreaks.

Additionally, the quick diagnosis likely limited the severity of the outbreak, containing its geographic spread and potentially reducing costs in terms of loss of life and commerce in a state with significant international produce trade. Understanding the exact strain causing the outbreak also allowed doctors to anticipate which symptoms to watch for in potentially infected patients.

“MCVR’s ongoing partnerships with Kerala’s state health services and private sector partners, beginning with pandemic Influenza A/H1N1 in 2009, as well as its work under GHSA with international partners like CDC on detection of emerging pathogens, were crucial in detecting the Nipah virus infection so quickly,” said Dr. Arunkumar Govindakarnavar, who serves as the head of MCVR.

IMPACTS OF A COORDINATED OUTBREAK RESPONSE

The ability to diagnose dangerous pathogens like Nipah virus is one critical part of India’s faster, smarter response capabilities, where partners now work hand-in-hand to contain deadly outbreaks at the source.

India’s commitment to GHSA and enhanced detection and response represent a significant gain in the world’s ability to address disease threats. With a population of 1.3 billion people, progress in India’s health security leads to a safer and more secure world.