As the last embers of polio smolder across the world, countries are contributing to the global effort to eradicate the disease once and for all. With CDC support, the Democratic Republic of the Congo (DRC) has made enormous strides towards polio eradication in the last 10 years.

With its last case of wild poliovirus (WPV) detected in December 2011, DRC was declared “free of wild poliovirus” in 2015 by the African Regional Polio Certification Committee. However, in 2017, outbreaks of vaccine-derived poliovirus (VDPV) occurred in Haut Lomami, Maniema, and Tanganyika provinces, with transmission continuing in 2018. Notification of these outbreaks led to an immediate need to intensify polio surveillance in the affected provinces. Surveillance for polio is conducted through finding and reporting cases of Acute Flaccid Paralysis (AFP).

Polio, or poliomyelitis, is a crippling and potentially deadly infectious disease caused by the poliovirus. The highly contagious virus spreads from person to person and can invade an infected person’s central nervous system, often resulting in paralysis.

Acute Flaccid Paralysis (AFP), a type of paralysis with sudden loss of muscle tone, can be a sign of infection with polio. Stool samples from AFP cases are collected and analyzed for the presence of polioviruses in specialized laboratories. AFP cases can only be confirmed as polio through these laboratory analyses.

DISEASE DETECTIVES ON THE FRONTLINES 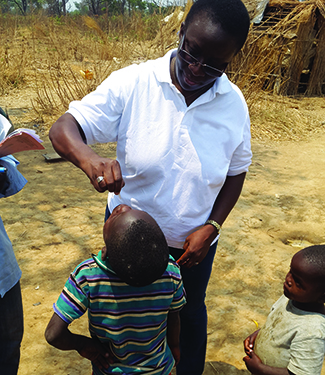 In response to the ongoing outbreaks, DRC called upon its skilled workforce of CDC-trained disease detectives at the Ministry of Public Health. Disease detectives serve as “boots on the ground” in the fight against disease, helping to prevent, track, contain, or eliminate the transmission of diseases before they cause large epidemics. They are often first on the scene to investigate potential outbreaks, as they were in 2017 when Ebola threatened the country’s Bas Uele province.

In October 2017, DRC’s disease detectives underwent a seven-day training led by polio experts from CDC’s Global Immunization Division. The training participants learned how to identify, investigate, and report AFP cases and how to help prepare for and conduct polio vaccination campaigns in response to outbreaks.

The trained disease detectives immediately took their new knowledge into the field. They collaborated with DRC’s Ministry of Public Health and the World Health Organization to actively search for and investigate cases of AFP in the three provinces affected by the VDPV outbreaks. Cumulatively, during November 2017 and February–March 2018, disease detectives visited 1,832 surveillance sites in the provinces. They searched clinical registers for cases of AFP and reviewed all available AFP surveillance documentation. Through their efforts, 99 AFP cases not previously reported to the surveillance system were identified and investigated. The disease detectives also taught more than 7,000 healthcare workers, traditional healers, community leaders, and community members how to identify and report AFP cases and provided local health facilities with needed surveillance tools.

CLOSER THAN EVER TO ERADICATION

Polio eradication is an important priority for CDC, which is why CDC’s Division of Global Health Protection and Global Immunization Division are working together to strengthen polio surveillance and outbreak response — including improving polio vaccination coverage — in polio-endemic and outbreak countries and other high-risk areas. Thanks to partnership from all corners of the globe, our world is closer than ever to having zero cases of this crippling and deadly disease.

Disease detectives in DRC have been instrumental in the timely containment of outbreaks. In recent years, DRC has partnered with CDC to establish two programs that train disease detectives: the two-year Field Epidemiology and Laboratory Training Program in 2010, and an accelerated FETP-Frontline program in 2016. As of January 2018, DRC has had 62 FETP-Advanced graduates, with 38 graduating from DRC FETP and 24 graduating from Central Africa Regional Program; DRC’s Frontline has had 86 graduates, all of whom have critical training, skills, and experience that are used to prepare for and respond to public health threats and emergencies.