Dr. Alain (on the left in blue hat) from the Democratic Republic of Congo at a check point during border control efforts in Forécariah, Guinea.

On May 11, 2017, the Ministry of Health of the Democratic Republic of Congo (DRC) notified the World Health Organization (WHO) of a cluster of suspected cases of Ebola virus disease in the Likati health zone of the province of Bas Uélé.

The Likati health zone is in a remote, forested location with poor roads, transportation, and connectivity (either cellular or landline), making it difficult for response teams to get there. Reaching the area means traveling first by plane to the province, then by car, and finally by motorcycle. This poses a challenge for responders trying to monitor and track cases, as well as for receiving immediate international assistance.

Despite this area being very remote, the country’s ongoing commitment to prepare against outbreaks has helped them in the response. The country’s health workers and laboratories were able to quickly identify the outbreak – a positive public health milestone for the country. Additionally, this particular outbreak occurred near a training site for the country’s newly established Frontline Field Epidemiology Training Program (FETP-Frontline), which is supported by CDC and is part of a longstanding partnership to train disease detectives who can swiftly respond to threats.

DRC’s Boots on the Ground 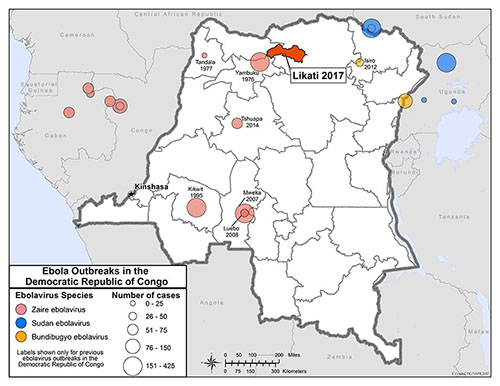 In recent years, DRC has strengthened its public health workforce by partnering with CDC to establish the two-year Field Epidemiology and Laboratory Training Program–Advanced (FELTP-Advanced) in 2013, and the accelerated FETP–Frontline program in 2016. The country’s FELTP-Advanced disease detectives responded to the 2014 Ebola outbreak in DRC, helping to limit the outbreak to 66 cases. Advanced FETP graduates were also deployed to Guinea during the 2014-2016 Ebola outbreak in West Africa, providing critical field support in identifying and monitoring potential cases.

The DRC-FETLP has now graduated 47 advanced residents and 59 frontline trainees, all of whom have the critical tools, skills, and experience to respond to an outbreak. A total of seven Congolese FELTP graduates have been deployed for the current Ebola response and are conducting contact tracing and providing technical support in Bas-Uélé province. According to Dr. Yassa Ndjakani, DRC-FELTP Resident Advisor, “These epidemiologists are well equipped to deal with the current Ebola outbreak in DRC. They serve as the region’s boots on the ground in the battle against infectious diseases and have the skills to stop an Ebola outbreak at its source.”

Thanks to a fast and coordinated response, the outbreak was declared over on July 2, 2017, with a total of eight cases of Ebola and four deaths reported in the country. This marks the 8th Ebola outbreak in DRC since the virus was first discovered in 1976 near the Ebola River.

Having experts on the ground as quickly as possible is essential to any emergency response. This is why CDC helps train the world’s disease detectives to fight against outbreaks — even when they strike the most remote corners of the world.

The recent Ebola response in DRC was coordinated by the World Health Organization (WHO) with support from the ministry of health, CDC, UNICEF, and other international partners. CDC’s in-country team has provided leadership and support in response to Ebola and other epidemic-prone diseases, including yellow fever, monkeypox, cholera, measles, and polio.