The Centers for Disease Control and Prevention (CDC) began implementing malaria interventions in Liberia in 2007 under the U.S. President’s Malaria Initiative. In 2014, CDC expanded its focus to support the government of Liberia’s 2014-2016 West Africa Ebola outbreak response. As Liberia continues to recover from the Ebola epidemic, CDC helps to strengthen laboratory, surveillance, emergency management and workforce capacities to respond to disease outbreaks in support of the Global Health Security Agenda. 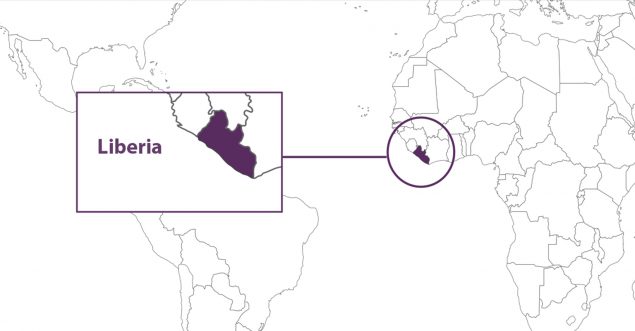 What CDC is Doing in Liberia

In today’s globally connected world, disease threats can spread faster and more unpredictably than ever before. CDC’s global health security efforts in Liberia improve the country’s ability to prevent, detect, and respond to infectious disease outbreaks before they become epidemics that could affect global populations. These efforts help Liberia reach the targets outlined in the Global Health Security Agenda (GHSA), a global partnership launched in 2014 to make the world safer and more secure from infectious disease threats.

Liberia has made significant progress in containing deadly disease outbreaks. On January 13, 2018, Liberia reported two cases of unidentified illness in Lofa County, close to Guinea and Sierra Leone. The National Reference Laboratory ruled out Ebola virus disease and Lassa fever within 24 hours, and identified Neisseria meningitidis (bacterium that can cause meningitis and other forms life-threatening diseases) within 48 hours of an oral swab from a deceased child. On January 19, a contact of the deceased child became ill; the same bacteria was confirmed within 48 hours. County health and rapid response teams led investigation and response activities. A total of nine cases, including four deaths, were identified. Through a rapid and robust response, Liberia controlled the outbreak to save lives and prevented spread into neighboring countries.

CDC supports Liberia in strengthening the capacity of its workforce to investigate and respond to disease outbreaks through the establishment of a Field Epidemiology Training Program (FETP). FETP trains a workforce of field epidemiologists—or disease detectives—to identify and contain outbreaks before they become epidemics. Participants focus on “learning by doing” to develop the skills for gathering critical data and translating it into evidence-based action. Three levels of training—advanced, intermediate, and frontline—help develop national, regional, and local capabilities to stop diseases at their source. A total of 189 frontline and 30 intermediate FETP fellows have graduated from the program as of January 2019. FETP trainees and graduates provided field support for several outbreak responses across in 2018, including measles, Lassa fever, meningitis, yellow fever, pertussis, and Shigella.

Malaria is a leading cause of death and disease in many countries, and young children and pregnant women are the groups most affected. Under the U.S. President’s Malaria Initiative, CDC has assigned a resident advisor to the malaria-endemic country of Liberia to support the implementation of malaria prevention and control interventions. These interventions include providing long-lasting insecticide-treated nets, preventing malaria in pregnancy, and improving diagnostics and case management. CDC has provided technical assistance to support the efforts of the National Malaria Control Program to develop treatment guidelines and improve malaria diagnostics.

CDC supports the ministry of health’s Men’s Health Screening Program. Since scientific information suggests that the Ebola virus can stay in the body of a survivor for more than a year, the screening program is an important effort to control future outbreaks. The program provides screening and counseling services for male Ebola survivors. It also educates men and women on how to reduce the risk of sexual transmission of the Ebola virus.

Vaccines prevent an estimated 2.5 million deaths among children under five every year. Yet one child dies every 20 seconds from a disease that could have been prevented by a vaccine. CDC, in collaboration with partners, provides technical support to Liberia for polio eradication and measles pre-elimination activities. CDC has deployed 30 public health professionals to work in Liberia on immunization activities through the Stop the Transmission of Polio program since the program began in 1999. When Ebola forced the suspension of the 2014 measles campaign, the resulting immunity gap led to the largest measles outbreak the country had seen in years. Liberia has begun a systematic community outreach campaign to restore vaccination rates.

CDC partner Riders for Health has transported more than 50,000 specimens across Liberia’s 15 counties and 300+ relay stations to facilitate rapid diagnosis of priority infectious diseases since 2015.

Liberia effectively responded to 87 outbreaks, including measles, acute bloody diarrhea, Lassa fever, meningitis and yellow fever in 2018. Supported the development and launch of the National Infection Prevention and Control (IPC) Guidelines in 2018. Assisted in workforce development of 14,000+ healthcare workers in basic IPC principles since 2015.

Supported the establishment of emergency operations centers at the national level and in 15 counties.

CDC Staff in Liberia
Liberia at a Glance