FoodNet has conducted population-based surveillance for laboratory-diagnosed infections caused by Campylobacter, Listeria, Salmonella, Shiga toxin-producing Escherichia coli (STEC) O157, Shigella, Vibrio, and Yersinia since 1996; Cyclospora since 1997; and STEC non-O157 since 2000. FoodNet also conducted surveillance for Cryptosporidium from 1997 through 2017. FoodNet began to collect information on infections identified by culture-independent methods in 2009 for STEC and Campylobacter and in 2011 for Listeria, Salmonella, Shigella, Yersinia, and Vibrio.

FoodNet is an active surveillance system, meaning that public health officials routinely communicate with more than 700 clinical laboratories serving the surveillance area to identify new infections and conduct periodic audits to ensure that all infections are reported.

FoodNet collects information on laboratory-diagnosed infections identified by culture or culture-independent diagnostic test (CIDT) for bacterial pathogens and microscopy or polymerase chain reaction (PCR) for parasites. Personnel at each FoodNet site collect information about cases of infection and share that information with CDC through FoodNet’s database. The information includes

The burden of illness pyramid is a model for understanding foodborne disease reporting, and illustrates steps that must occur for an episode of illness in the population to be registered in surveillance. 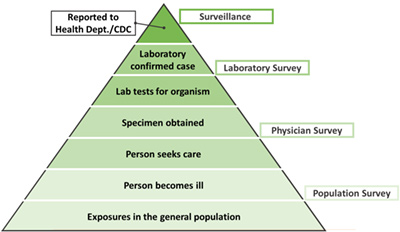 The burden of illness pyramid is a model for understanding foodborne disease reporting.

Starting from the bottom of the pyramid: