Country’s Advancements, Long-term Collaboration with CDC and WHO, and Vaccine Donation from Walgreens Lead to Solid Step Forward in Influenza Prevention 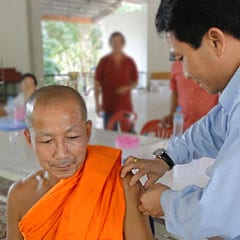 Dr. Anonh, Director of the National Immunization Program for Lao Ministry of Health, administers flu vaccine during a clinic in rural Vientiane.

On April 24, 2012, the Lao People’s Democratic Republic (Lao PDR, or Laos), a small and relatively resource-poor southeast Asian country, launched a seasonal influenza vaccination program to protect adults at high risk of serious flu-related complications, including pregnant women, in that country. The program is the product of a 6-year collaboration between the Centers for Disease Control and Prevention (CDC), the World Health Organization (WHO) and the Lao Ministry of Health to develop the country’s influenza public heath capacities. This year’s vaccine was provided by Walgreensexternal icon, which donated 375,000 doses of trivalent inactivated vaccine (commonly called flu shots) directly to Lao PDR.

In particular, the expanded surveillance system and enhanced lab capabilities are providing Lao PDR with a stream of data that point to the importance of influenza prevention. The country can use the information to determine the best time to vaccinate their people and the best vaccine to use. Also as a result of enhancements, Lao PDR is now regularly submitting data to the international network that tracks emerging influenza viruses and provides vaccine recommendations. (See Local Improvements a World Away Support Global Health for more.)

“Lao PDR has exerted commendable efforts to date, and has together with CDC and WHO taken great strides to monitor influenza and clear the way in terms of policy and regulatory requirements for flu vaccination efforts,” said Dr. Andrew Corwin, Influenza Coordinator for CDC at the U.S. Embassy in Vientiane.

On the road to developing this year’s vaccination program, Lao PDR’s National Center for Laboratory and Epidemiology (NCLE) attained World Health Organization National Influenza Center designation in 2010. As a National Influenza Center, the NCLE now conducts lab surveillance, subtypes viruses that are responsible for disease outbreaks, and contributes virus isolates and surveillance data to WHO’s Global Influenza Surveillance and Response System. Viruses submitted to the WHO system are reviewed each year by a panel of international experts to determine which viruses should be included in the vaccine formulations for the Northern and Southern Hemisphere seasonal influenza vaccines.

“Lao PDR’s participation in the global surveillance system also means that influenza viruses emerging in Laos can be reported on more quickly than ever before. This quick reporting means the world as a whole is an important step closer to responding in time to novel influenza viruses with pandemic potential,” said Dr. Nancy Cox, Director of Influenza Division at CDC.

Years of data from industrialized, developed countries show that influenza is a serious disease. It can cause serious health complications (like pneumonia) and can make conditions like asthma and diabetes worse. It can lead to hospitalization and sometimes even death. In the United States, roughly 200,000 people are hospitalized with seasonal flu each year. Over a period of 31 seasons between 1976 and 2007, estimates of flu-associated deaths in the United States ranged from a low of about 3,000 people to a high of about 49,000.

Recently collected data from Laos and other developing countries are showing that influenza is an important cause of pneumonia and hospitalizations in these settings, similar to what has been long-appreciated in industrialized countries like the United States. Information about the impact of influenza in developing countries in Southeast Asia is just becoming available as a result of collaborations like the one between Lao PDR, WHO and CDC.

Surveillance for influenza-like illness and severe acute respiratory illnesses has been established in eight different sites in Laos since 2007. Data from these sites reveal that up to 40% of patients have tested positive for influenza during the Lao PDR flu season, suggesting that influenza is a significant cause of respiratory illness for the country. These data are similar to that of other countries.

Decades of public health research have shown that getting a flu vaccine is the best way to prevent influenza and related health complications. But in Laos, like other low-income countries, influenza vaccines are not available as part of routine public health programs.

Groundwork laid by the 6-year collaboration with CDC and WHO has established that there are important public health benefits to be realized by such a program in Laos. It has also led to development of infrastructure and capacity to plan and implement this kind of vaccination program.

“Findings from the last three years of surveillance in Laos show that seasonal flu vaccine would be an important tool for reducing respiratory illness in that country,” said Dr. Joseph Bresee, Chief of the Epidemiology and Prevention Branch at CDC.

Pregnant woman receiving the vaccine at the Maternal and Child Hospital in Vientiane, Lao PDR.

Research indicates that Laos has a season during which influenza activity is higher compared with other times during the year; the season begins in July and ends in December, roughly coinciding with the country’s rainy season. The Lao PDR vaccination program will vaccinate people in April and May (prior to the beginning of their flu season), with the goal of protecting them against influenza before flu activity begins to increase.

Recent surveillance data indicate that the influenza viruses that are circulating in the Northern Hemisphere are also circulating in Lao PDR, meaning that the 2011-2012 Northern Hemisphere vaccine should be effective in preventing influenza in Laos. This fact enabled Walgreens to donate influenza vaccine manufactured for the U.S. flu season to benefit people a half a world away, before the start of their flu season.

Lao PDR Ministry of Health decided that this year’s donated vaccine will go to key populations who are at risk of flu-related complications: pregnant women, elderly people, and people with chronic health conditions such as heart and lung disease. The vaccine will also be provided to health care workers. 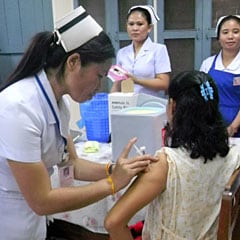 Pregnant woman receiving the vaccine at the Maternal and Child Hospital in Vientiane, Lao PDR

This isn’t the country’s first experience with flu vaccination. During the 2009 H1N1 pandemic, Lao PDR conducted a 2009 H1N1 vaccine campaign (with vaccine provided by WHO and Australia) that is widely regarded as a success. The seasonal vaccination program this season is seen as building on that experience.

“The vaccine program in Lao PDR is a great example of how partnerships between public health organizations and private companies can lead to important gains in the fight against influenza,” said Lisa Koonin, Senior Advisor to the Influenza Coordination Unit at CDC. 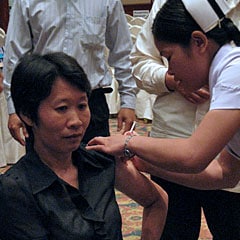 Vaccination occurs directly after the launch ceremony on April 24.

This year’s program campaign began with an official kickoff in Lao PDR’s capital city, Vientiane, by the Ministry of Health on the morning of April 24, 2012 (Lao PDR time). Collaborators from CDC’s Influenza Division, the U.S. Embassy in Lao PDR and the WHO were in attendance, along with senior executives from Walgreens. Following the campaign launch in Vientiane, administration of flu vaccine began in three of the most densely populated provinces in Lao PDR (Savannakhet, Luang Prabang, and Champasak). Following vaccination, a team of trained field responders will follow up with people after they have been vaccinated to learn more about their vaccination experience and about any vaccine-related adverse events that might have occurred. Decades of use of flu vaccine in the United States and other countries has shown that influenza vaccines are safe and serious adverse events are rare, but data specific to Laos is important for the Lao PDR Ministry of Health in making future decisions about vaccine administration in their country.

“The official launch of this vaccination program is clear evidence of the extraordinary progress that the Lao PDR Ministry of Health in collaboration with partners has achieved in detecting, measuring, and ultimately working on prevention of influenza in Laos,” said Ann Moen, Influenza Division’s Associate Director for Extramural Programs at the CDC.