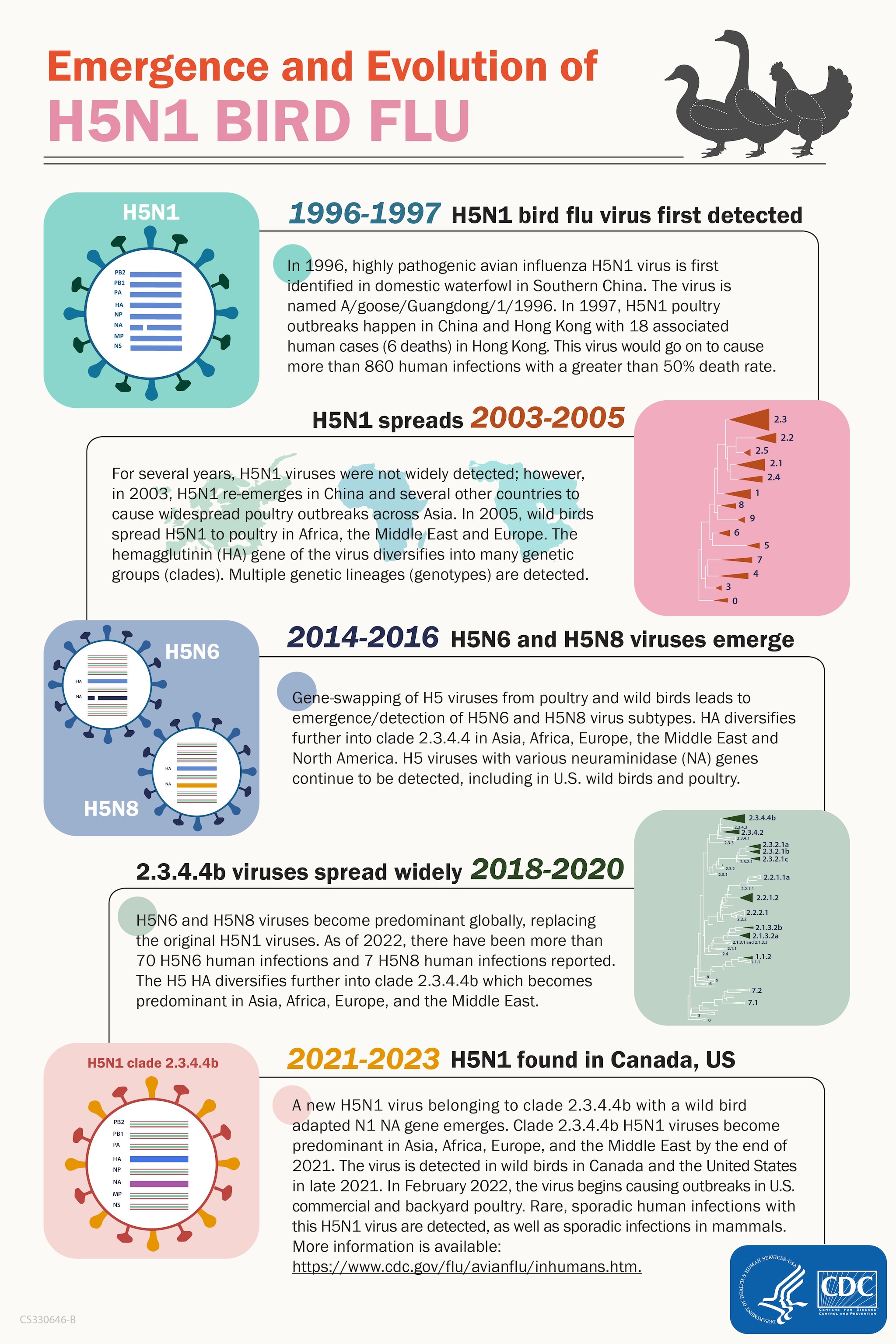 In 1996, highly pathogenic avian influenza H5N1 virus is first identified in domestic waterfowl in Southern China. The virus is named A/goose/Guangdong/1/1996. In 1997, H5N1 poultry outbreaks happen in China and Hong Kong with 18 associated human cases (6 deaths) in Hong Kong. This virus would go on to cause more than 860 human infections with a greater than 50% death rate.

For several years, H5N1 viruses were not widely detected; however, in 2003, H5N1 re-emerges in China and several other countries to cause widespread poultry outbreaks across Asia. In 2005, wild birds spread H5N1 to poultry in Africa, the Middle East and Europe. The hemagglutinin (HA) gene of the virus diversifies into many genetic groups (clades). Multiple genetic lineages (genotypes) are detected.

Gene-swapping of H5 viruses from poultry and wild birds leads to emergence/detection of H5N6 and H5N8 virus subtypes. HA diversifies further into clade 2.3.4.4 in Asia, Africa, Europe, the Middle East and North America. H5 viruses with various neuraminidase (NA) genes continue to be detected, including in U.S. wild birds and poultry.

H5N6 and H5N8 viruses become predominant globally, replacing the original H5N1 viruses. As of 2022, there have been more than 70 reported H5N6 human infections and 7 H5N8 human infections. The H5 HA diversifies further into clade 2.3.4.4b which becomes predominant in Asia, Africa, Europe, and the Middle East.

A new H5N1 virus belonging to clade 2.3.4.4b with a wild bird adapted N1 NA gene emerges. Clade 2.3.4.4b H5N1 viruses become predominant in Asia, Africa, Europe, and the Middle East by the end of 2021. The virus is detected in Canada and U.S. wild birds in late 2021. In February 2022, the virus begins causing outbreaks in U.S. commercial and backyard poultry. At this time, two human cases with current H5N1 bird flu viruses have been reported. One occurred in the United Kingdom in 2021 and one in the United States in 2022. More information is available: https://www.cdc.gov/flu/avianflu/inhumans.htm.