This outbreak investigation is over. Illnesses could continue because people may be unaware of the risk of Campylobacter infections from puppies and dogs. Information about how to prevent illness when handling puppies and dogs is available for pet owners.

CDC, several states, and the U.S. Department of Agriculture’s Animal and Plant Health Inspection Service (USDA-APHIS) investigated a multistate outbreak of multidrug-resistant Campylobacter infections. Epidemiologic and laboratory evidence indicated that contact with puppies sold through Petland stores were a likely source of this outbreak. This outbreak investigation is over. Illnesses could continue to occur because people may be unaware of the risk of Campylobacter infections from puppies and dogs.

A total of 113 people with laboratory-confirmed infections or symptoms consistent with Campylobacter infection were linked to this outbreak. Illnesses were reported from 17 states. Illnesses started on dates ranging from January 12, 2016 to January 7, 2018. Ill people ranged in age from less than 1 year to 86, with a median age of 27. Sixty-three percent of ill people were female. Of 103 people with available information, 23 (22%) were hospitalized. No deaths were reported. Whole genome sequencing (WGS) showed that isolates from people infected with Campylobacter were closely related genetically. This close genetic relationship means that people in this outbreak were more likely to share a common source of infection.

Campylobacter bacteria isolated from clinical samples from people sickened in this outbreak were resistant to commonly recommended, first-line antibiotics. This means it may be difficult to treat these infections with the antibiotics usually prescribed for Campylobacter infections. Antibiotic resistance may be associated with increased risk of hospitalization, development of a bloodstream infection, or treatment failure in patients. Using WGS, we identified multiple antimicrobial resistance genes and mutations in most isolates from 38 ill people and 10 puppies in this outbreak. This finding matched results from standard antibiotic susceptibility testing methods used by CDC’s National Antimicrobial Resistance Monitoring System laboratory on isolates from five ill people and seven puppies in this outbreak. The 12 isolates tested by standard methods were resistant to azithromycin, ciprofloxacin, clindamycin, erythromycin, nalidixic acid, telithromycin, and tetracycline. In addition, 10 were resistant to gentamicin, and 2 were resistant to florfenicol.

Ill people reported contact with different breeds of puppies at different store locations in several states. The investigation did not identify a common breeder where puppies infected with the outbreak strain of Campylobacter originated. Puppies in this outbreak may have become infected at various points along the distribution chain when they had contact with infected puppies from other breeders or distributors during transport to pet store locations. Enhanced infection prevention measures throughout the distribution chain may help reduce the spread of Campylobacter infections among puppies.

This multidrug-resistant outbreak highlights the need for responsible use of antibiotics in pets. Education about best practices for Campylobacter disease prevention, diarrhea management in puppies, and responsible antibiotic use is essential throughout the distribution chain to help prevent the emergence and spread of antibiotic resistance. Pet owners should be aware that any puppy or dog, regardless of where it is purchased or adopted, may carry germs like Campylobacter that can make people sick. Always wash your hands thoroughly with soap and water right after touching puppies and dogs or after picking up their poop. Work with your veterinarian to keep your animal healthy to prevent disease. More information about how to prevent illness when handling puppies and dogs is available for pet owners. 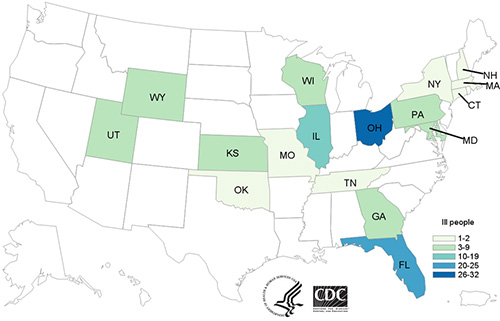 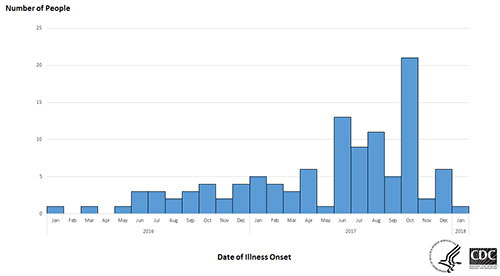 Puppies and dogs can carry Campylobacter, a germ that can make people sick. Follow the steps below to prevent illness.

Always wash hands thoroughly with soap and water after touching your puppy or dog, after handling their food, and after cleaning up after them.

Within a few days after getting a new puppy or dog, take it to the veterinarian for a health check-up.

Advice for Pet Stores and Workers

Puppies and dogs can carry Campylobacter, a germ that can make people sick. Follow the steps below to prevent illness.

Wash your hands with soap and water after handling puppies or dogs.

Eat and store your food safely.

Practice responsible use of antibiotics in pet stores.

Campylobacter bacteria isolated from clinical samples from ill people and from puppies in this outbreak were resistant to recommended, first-line antibiotics used to treat severe Campylobacter infections.

Clinicians should consider the following when managing patients who have suspected or confirmed Campylobacter infection related to this outbreak:

Thoroughly clean surfaces and equipment that have been in contact with stool from any dog suspected to have a Campylobacter infection.

Talk to pet owners about taking simple steps to prevent getting sick from their puppies or dogs.

The Ohio Department of Health, several other states, CDC, and USDA-APHIS are investigating a multistate outbreak of human Campylobacter infections linked to puppies sold through Petland stores. Investigators are looking for the source of infections so they can recommend how to stop the outbreak and prevent more illnesses in order to protect human and animal health.

As of September 11, 2017, the outbreak includes 39 cases in 7 states (Florida, Kansas, Missouri, Ohio, Pennsylvania, Tennessee, and Wisconsin). A list of the number of cases by state can be found on the Case Count Map page.

Epidemiologic and laboratory findings have linked the outbreak to contact with puppies sold through Petland stores. Among the 39 ill people, 12 are Petland employees from 4 states and 27 either recently purchased a puppy at Petland, visited a Petland, or visited or live in a home with a puppy sold through Petland before illness began.

Regardless of where they are from, puppies might carry Campylobacter germs. Read Advice to Pet Owners and Advice to Pet Store Workers for illness prevention tips.