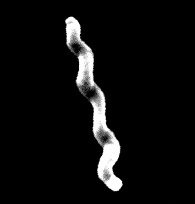 Campylobacter is a gram-negative, microaerophilic genus of bacteria of the family Campylobacteriacae. There are more than 20 species of Campylobacter, not all of which cause human illness. Approximately 90% of human Campylobacter illness is caused by one species, Campylobacter jejuni. Less common species, such as C. coli, C. upsaliensis, C. fetus, and C. lari, can also infect people.

Campylobacter jejuni grows best at 37°C to 42°C and seems to be well-adapted to birds, which have an approximate body temperature of 41°C to 42°C and can carry the bacteria without becoming ill.

These bacteria are fragile. They cannot tolerate drying. Freezing reduces the number of Campylobacter bacteria on raw meat.

Active surveillance through the Foodborne Diseases Active Surveillance Network (FoodNet) indicates that about 20 cases per 100,000 people are diagnosed each year. Many more cases go undiagnosed or unreported. CDC estimates that 1.5 million people in the United States become ill from Campylobacter infection every year.

Most people with Campylobacter infection recover completely within one week.

Campylobacter infection can result in long-term consequences, such as arthritis, irritable bowel syndrome (IBS), and Guillain-Barré syndrome (GBS). CDC estimates that only 0.2 to 1.7 in every 1,000 diagnosed and undiagnosed Campylobacter illnesses leads to GBS, but estimates Campylobacter are responsible for 5-41% of GBS illnesses

The use of CIDTs as stand-alone tests for the direct detection of Campylobacter in stool is increasing. Data indicate that the sensitivity, specificity, and positive predictive value of these assays vary, depending on the manufacturer. Culture confirmation of CIDT-positive specimens (called reflex culture) can be used to obtain the whole genome sequence, which can provide antimicrobial susceptibility data and molecular subtyping.

Most infections are self-limited. Patients should drink extra fluids as long as the diarrhea lasts. Antimicrobial therapy may be used to treat people who are severely ill or at risk for severe disease.

People at risk for severe disease include people 65 years and older, pregnant women, and people with weakened immune systems, such as those with the blood disorders thalassemia and hypogammaglobulinemia, people with AIDS, and people receiving some kinds of chemotherapy.

Anyone can become infected with Campylobacter but infection is more common in males, children younger than 5 years, and people 65 years and older.