Many cases of botulism are preventable.

Many cases of foodborne botulism have happened after people ate home-canned, preserved, or fermented foods that were contaminated with toxin. The foods might have become contaminated if they were not canned (processed) correctly.

Foods with low acid content are the most common sources of home-canning related botulism cases. Examples of low-acid foods are: 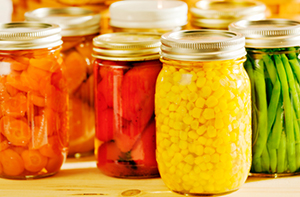 Home Canning: Protect Yourself from Botulism

New sources of foodborne botulism continue to be identified. Contamination can happen when food is handled improperly when it is made, when it is stored, or when it is used by consumers. Some examples of foods that have been contaminated are:

In Alaska, most cases of foodborne botulism are caused by fermented fish and other aquatic animals.

If you preserve, can, or ferment your own foods, you can reduce the chance of these foods giving you, your family, or friends botulism by:

Everyone can reduce their chances of getting botulism by:

Prevent wound botulism by keeping wounds clean. If wounds appear infected, seek medical care quickly. A wound might be infected if it is:

Not all wounds with botulism show these general symptoms of a wound infection. If you have a wound and begin to have symptoms of botulism, seek medical care immediately.

Wound botulism may happen after traumatic injuries, such as motorcycle crashes, and surgeries. Be alert to signs of infection.

Several babies in Texas have become ill with infant botulism after using honey pacifiers. Do not give honey or products made with it, including honey pacifiers, to children younger than 12 months. Find out more

Most infant botulism cases cannot be prevented because the bacteria that causes the disease is in soil and dust. The bacteria can be found inside homes on floors, carpet, and countertops—even after cleaning. For almost all children and adults who are healthy, ingesting botulism spores is not dangerous and will not cause botulism (it’s the toxin that is dangerous). For reasons we do not understand, some infants get botulism when the spores get into their digestive tracts, grow, and produce the toxin.

Honey can contain the bacteria that causes infant botulism, so do not feed honey to children younger than 12 months. Honey is safe for people 1 year of age and older. Learn more about infant botulism from the Infant Botulism Treatment and Prevention Program.

You can prevent iatrogenic (an illness caused by medical examination or treatment) botulism by getting injections of botulinum toxin only by licensed practitioners: