Injection Drug Use and Wound Botulism

Wound botulism is a rare but serious illness that happens when a germ called Clostridium botulinum gets into a wound and makes a toxin. This toxin attacks your body’s nerves, which can make it hard to breathe and can cause muscle weakness and even death. If you get wound botulism, you will need medicine called antitoxin. The antitoxin can stop the toxin from causing more harm, but it can’t undo the damage already done. Even after receiving antitoxin, you might need to stay in the hospital for several weeks or even months before you recover enough to go home.

If you get wound botulism and don’t get medical treatment, you might die. If you have symptoms of wound botulism, see a doctor or go to an emergency room immediately.

What to Watch For

Symptoms of wound botulism usually appear several days after injecting contaminated drugs rather than immediately. That’s because it takes several days, or even a couple of weeks, for the germs to multiply in the body and produce the toxin.

As the disease gets worse, you may develop more symptoms, such as:

You can get wound botulism even if the injection site doesn’t look infected.

If you or someone you know has symptoms of botulism, see a doctor or go to the emergency room immediately. If you do not, your symptoms may continue to get worse and can even be life-threatening. It is important to get medical care as quickly as possible, because the antitoxin and other treatments work better the earlier they are given.

Some symptoms of wound botulism can look like symptoms of opioid overdose, such as slurred speech or inability to talk, weakness, and trouble breathing. Opioids are painkilling drugs, such as oxycodone (“OxyContin”), oxymorphone (“Opana”), hydrocodone (as in Vicodin), and hydromorphone (“Dilaudid”), as well as heroin.

When you seek medical care, be direct and honest with your medical providers. Tell them about any drugs you have used in the past two weeks and how you used them. It can be easy to mistake wound botulism for other, more common illnesses. Your doctor needs to know if you use injection drugs, so you can be diagnosed and treated quickly and correctly.

How injecting heroin can give you botulism 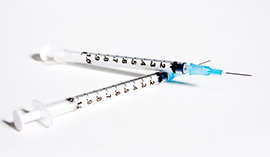 Every year in the United States, about 20 people are diagnosed with wound botulism. Most get it from skin popping or muscle popping black tar heroin. We don’t know how black tar heroin gets contaminated with the germ that causes botulism. Because the germ lives in soil, it might get into heroin when the drug is produced or transported, when it is cut or mixed with other substances, when it is prepared for use, or through some other way. Drug-use equipment (“works”) used to prepare or inject contaminated drugs might also spread the botulism germs to anyone who uses it.

How to Stay Safe

You can prevent wound botulism by not injecting illicit drugs. If you are ready to quit using, there are resources to help you succeed:

We don’t know if using safe injection practices can prevent botulism, but injecting safely can prevent many other infections, such as HIV and hepatitis C virus infection. Reduce your chance of getting a serious illness by using clean needles and equipment and cleaning your skin before you inject.