The VEHSS team conducted a review of published literature on examination-based population studies reporting the prevalence of glaucoma.

Glaucoma is a general term for a number of eye conditions that progressively damage the optic nerve, consequently causing vision loss.(AOA, 2015) Diagnosis of glaucoma is complex, but is often associated with elevated intraocular pressure, optic nerve damage, and reduction in visual acuity and visual field. The most common form of glaucoma is primary open-angle glaucoma (OAG). If the eye is functioning normally, fluid flows out of the anterior chamber through the open angle between the cornea and iris and out the eye. With OAG, the fluid flows out slowly and builds up, increasing the pressure on the eye that may cause gradual loss of vision. Acute angle-closure glaucoma (ACG), also known as angle-closure or narrow-angle glaucoma, is less common and occurs when the angle is blocked by the iris and may rapidly cause vision loss if left untreated.(AOA, 2015)  Other forms of glaucoma include: secondary glaucoma (caused by medical complications such as diabetes or an injury to the eye); congenital glaucoma; and normal tension glaucoma (damage occurs although the eye pressure is normal). Patients with risk factors for glaucoma, such as elevated intraocular pressure, may be diagnosed as glaucoma suspect. Vision loss from glaucoma is permanent, but progression may be slowed or halted through early diagnosis and treatment.

There were 14 studies published between 1991 and 2016 that examined the prevalence of glaucoma. These studies examined a variety of demographic variables including race/ethnicity, age, sex, income, and education level. Results are limited to open-angle glaucoma, acute angle-closure glaucoma, and glaucoma suspect (presence of glaucoma risk factors but no damage to the eye). The sources were:

Figure 1 below shows the estimated prevalence rate for any glaucoma and open-angle glaucoma derived from the selected studies that reported an overall rate. The high degree of variation among the results in this figure is likely due to in part to methodological, disease definition, and population differences among the studies. This figure excludes studies that did not report an overall rate for the study. The figure is intended to illustrate the range of published prevalence values; direct comparison of the studies is impossible without considering the underlying differences in the studies. Detailed results from each individual study are available in the full report “Published Examination-based Prevalence of Major Eye Disorders.”

The wide disparity in estimates is like due largely to differences in the study sample, and whether the study included glaucoma suspects. Because of these differences, the estimates are not directly comparable. Comparing the studies is challenging because of a number of differences in patient demographics, data collection, and reporting standards. Some studies only looked at the overall glaucoma rate while others examined different glaucoma types including glaucoma suspect, open-angle, and angle closure.

Figure 1.  Overall Prevalence Rates of Any and Open-Angle Glaucoma in Selected Studies. 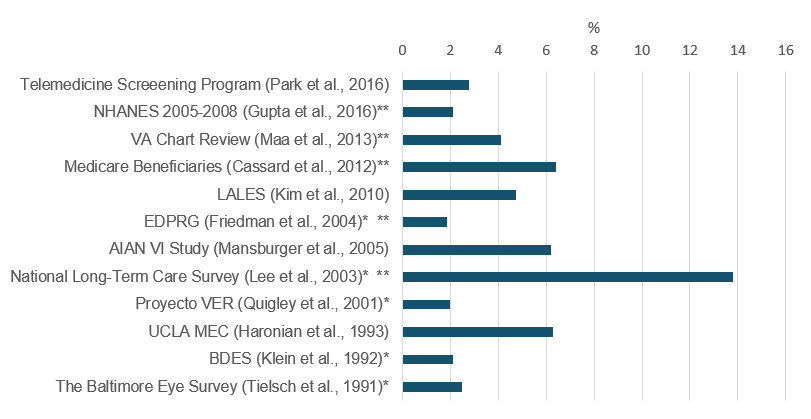