More than 3.4 million (3%) Americans aged 40 years and older are either legally blind (having visual acuity [VA] of 20/200 or worse or a visual field of less than 20 degrees) or are visually impaired (having VA of 20/40 or less) (Eye Diseases Prevalence Research Group, 2004). The Federal Interagency Forum on Aging Related Statistics (2008)External estimates that 17% of the age 65 and older population report “vision trouble.” Twenty-one million Americans report functional vision problems or eye conditions that may compromise vision. (Pleis & Lethbridge-Çejku, 2007). Older people are more likely to experience vision loss because of age-related eye diseases (Table 1). State level data are available from the Vision Loss and Access to Eye Care Module of the Behavioral Risk Factors Surveillance System (BRFSS). A 2006 CDC study revealed that self-reported vision loss (a little, moderate, or extreme difficulty) ranged from 14.3% to 20.5% among five states. The Vision Module of the BRFSS allows states to estimate population and describe the characteristics of people aged 40 years and older who experience vision loss. Despite the magnitude of the population at risk for vision loss as well as the grave consequences of vision loss and blindness, many individuals do not benefit from available cost-effective early detection, timely treatments, and interventions to promote health. 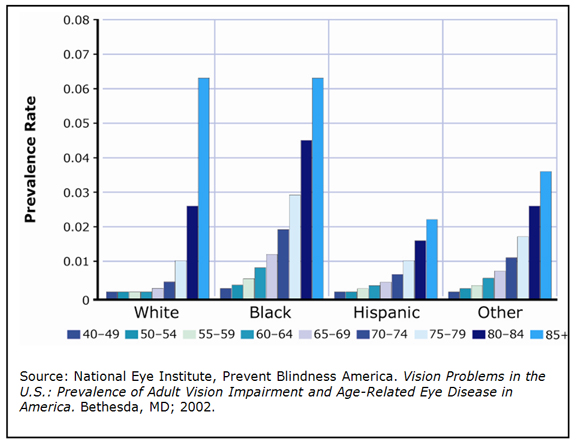 A recent CDC investigation (Saaddine, Honeycutt, Narayan, Zhang, Klein, & Boyle, 2008) revealed that eye diseases associated with diabetes are likely to surge during the next four decades reflecting overall changes in the population as well as improved treatment of diabetes and survival among those who experience diabetes. The number of people who experience diabetic retinopathy is expected to triple between 2005 to 2050 from 5.5 million to 16 million people.