Related Pages
What is suicide? 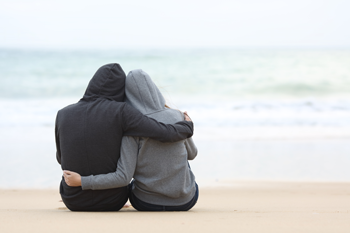 Several factors can increase the risk for suicide and protect against it. Suicide is connected to other forms of injury and violence, and causes serious health and economic consequences. For example, suicide risk is higher among people who have experienced violence, including child abuse, bullying, or sexual violence.  Protective factors like family and community support, or “connectedness”, and easy access to health care can help decrease the risk for suicidal thoughts and behavior.

Suicide and other forms of violence can be prevented by using a public health approach that addresses risk and protective factors for multiple types of violence. For more information about self-directed violence definitions please see Self-Directed Violence Definitions pdf icon[1.31 MB, 96 Pages, 508]

Suicide is a large and growing public health problem. Suicide is the 10th leading cause of death in the United States. It was responsible for more than 47,000 deaths in 2017, resulting in about one death every 11 minutes. Every year, many more people think about or attempt suicide than die by suicide. In 2017, 10.6 million American adults seriously thought about suicide, 3.2 million made a plan, and 1.4 million attempted suicide.

Some groups have higher rates of suicide than others. Suicide rates vary by race/ethnicity, age, and other population characteristics, with the highest rates across the life span occurring among non-Hispanic American Indian/Alaska Native and non-Hispanic White populations. Other Americans disproportionately impacted by suicide include Veterans and other military personnel and workers in certain occupational groups like construction and the arts, design, entertainment, sports, and media field. Sexual minority youth bear a large burden as well, and experience increased suicidal ideation and behavior compared to their non-sexual minority peers.

In addition to the number of people who are injured or die, suicide also affects the health of others and the community. When people die by suicide, their family and friends can experience shock, anger, guilt, and depression. The economic toll of suicide on society is immense as well. Suicides and suicide attempts cost the nation almost $70 billion per year in lifetime medical and work-loss costs alone.

People who attempt suicide and survive may experience serious injuries, such as broken bones or brain injury. These injuries can have long-term effects on their health. People who survive suicide attempts may also experience depression and other mental health problems.

Many other people are impacted by knowing someone who dies or by personally experiencing suicidal thoughts. Additionally, being a survivor or someone with lived experience increases one’s risk of suicide.

See Suicide Resources for articles and publications about the consequences of suicide.

Top of Page
How can we prevent suicide?

CDC has developed a technical package, Preventing Suicide: A Technical Package of Policy, Programs, and Practices pdf icon[6.11 MB, 62 Pages, 508] that provides information on the best available evidence for suicide prevention. Also available in Spanish pdf icon[34 MB, 64 Pages, 508]. The technical package can be used to inform a comprehensive, multi-level and multi-sectoral approach within communities and states. It includes strategies to prevent suicide in the first place, by decreasing suicide risk factors and increasing protective factors. Strategies range from a focus on the whole population regardless of risk to strategies designed to support people at highest risk. This technical package includes strategies and approaches that go beyond individual behavior change to better address factors impacting communities and populations. 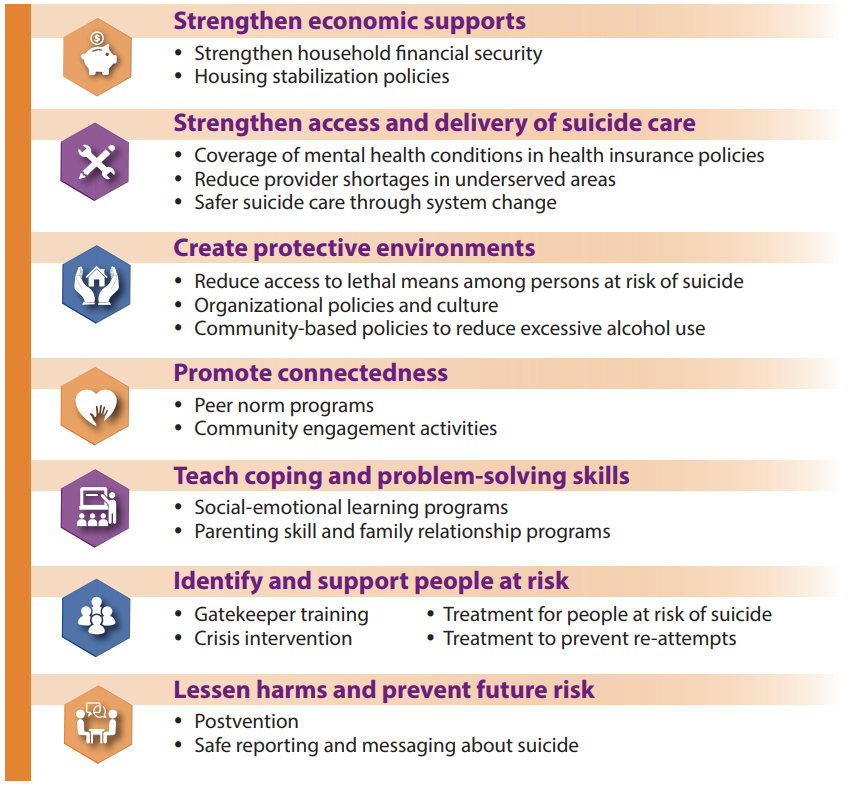