What are Vibrio bacteria?

Vibrio bacteria naturally live in certain coastal waters and are present in higher concentrations between May and October when water temperatures are warmer. 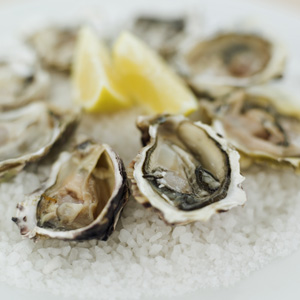 You can get a Vibrio infection from eating raw oysters. Find out why >

About a dozen Vibrio species can cause human illness, known as vibriosis. The most common species causing human illness in the United States are Vibrio parahaemolyticus, Vibrio vulnificus, and Vibrio alginolyticus.

Note: This website focuses on vibriosis, not cholera, which is caused by other strains of Vibrio. To learn about cholera, visit CDC’s cholera website.

Most people become infected by eating raw or undercooked shellfish, particularly oysters. Certain Vibrio species can also cause a skin infection when an open wound is exposed to salt water or brackish water. Brackish water is a mixture of fresh and salt water. It is often found where rivers meet the sea.

Find out steps you can take to prevent infection.

People with compromised immune systems, especially those with chronic liver disease, are more likely to get vibriosis. Eating raw seafood, particularly oysters, and exposing open wounds to salt water or brackish water can increase a person’s chance for getting vibriosis.

Learn more about Vibrio and oysters.

During which months are people more likely to get vibriosis?

About 80% of infections occur between May and October when water temperatures are warmer.

How common is vibriosis?

CDC estimates that vibriosis causes 80,000 illnesses each year in the United States. About 52,000 of these illnesses are estimated to be the result of eating contaminated food.

The most commonly reported species, Vibrio parahaemolyticus, is estimated to cause 45,000 illnesses each year in the United States.

Is vibriosis a serious disease?

Most people with a mild case of vibriosis recover after about 3 days with no lasting effects. However, people with a Vibrio vulnificus infection can get seriously ill and need intensive care or limb amputation. About 1 in 5 people with this type of infection die, sometimes within a day or two of becoming ill.

How can vibriosis be prevented?

To reduce your chance of getting vibriosis, don’t eat raw or undercooked shellfish, such as oysters. If you have a wound (including from a recent surgery, piercing, or tattoo), avoid contact with salt water or brackish water or cover the wound with a waterproof bandage if there’s a possibility it could come into contact with salt water or brackish water, raw seafood, or raw seafood juices.

Get more tips for preventing vibriosis.

How does CDC monitor vibriosis?

Vibriosis has been a nationally notifiable disease since 2007.

Health departments report cases to the Cholera and Other Vibrio Illness Surveillance (COVIS) system. COVIS was initiated by CDC, FDA, and four Gulf Coast states (Alabama, Florida, Louisiana, and Texas) in 1989. By the early 2000s, almost all states were voluntarily reporting.

Because Vibrio bacteria are not easily identified with routine testing, many cases are not reported.