Driving Under the Influence of Marijuana and Illicit Drugs Among Persons Aged ≥16 Years — United States, 2018 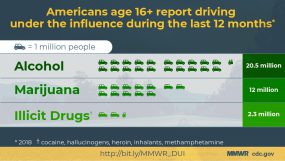 Marijuana and alcohol use among injured drivers evaluated at level I trauma centers in Arizona, 2008–2014external icon

Arizona legalized medical marijuana in April 2011. This study examined marijuana and alcohol use trends among injured drivers aged 16 and older who were evaluated at Level I trauma centers in Arizona, before and after medical marijuana was legalized in the state. The study found that during 2008–2014, of the 30,083 drivers treated at Level I trauma centers, 2,590 tested positive for marijuana; of these, 1,087 (42%) also tested positive for alcohol. Among 23,186 injured drivers with alcohol (BAC) results, 5,266 (23%) exceeded the legal limit for their age. Overall, medical marijuana legalization was associated with a small but significant increase in positive tests for marijuana and alcohol. Despite the small annual post-law increases in marijuana-positive drivers compared with the pre-law trend, alcohol-impaired driving remains a greater threat to road safety in Arizona. 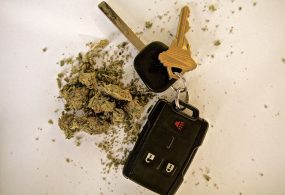 This article in Alcoholism: Clinical and Experimental Research reports on an evaluation, conducted by CDC, the Pacific Institute for Research and Evaluation, and the Florida Department of Highway Safety and Motor Vehicles, that showed mandating treatment for offenders in interlock programs based on the number of times they are “locked out” resulted in reduced re-arrests after the interlock was removed. 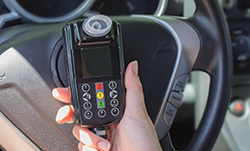 (July 2016) – Reducing motor vehicle crash deaths was one of the great public health achievements of the 20th century for the US. However, more than 32,000 people are killed and 2 million are injured each year from motor vehicle crashes. In 2013, the US crash death rate was more than twice the average of other high-income countries. In the US, front seat belt use was lower than in most other comparison countries. One in 3 crash deaths in the US involved alcohol-impaired driving, and almost 1 in 3 involved speeding. Lower death rates in other high-income countries and a high percentage of risk factors in the US suggest that we can make more progress in reducing crash deaths.

(October 2012) – The percentage of teens in high school who drink and drive has decreased by more than half since 1991,* but more can be done. Nearly one million high school teens drank alcohol and got behind the wheel in 2011. Teen drivers are 3 times more likely than more experienced drivers to be in a fatal crash. Drinking any alcohol greatly increases this risk for teens.

Research has shown that factors that help to keep teens safe include parental involvement, minimum legal drinking age and zero tolerance laws, and graduated driver licensing systems. These proven steps can protect the lives of more young drivers and everyone who shares the road with them.

*High school students aged 16 years and older who, when surveyed, said they had driven a vehicle one or more times during the past 30 days when they had been drinking alcohol.

(October 2011) – US adults drank too much and got behind the wheel about 112 million times in 2010. Though episodes of driving after drinking too much (“drinking and driving”) have gone down by 30% during the past 5 years, it remains a serious problem in the US. Alcohol-impaired drivers* are involved in about 1 in 3 crash deaths, resulting in nearly 11,000 deaths in 2009.

Alcohol-impaired driving is never OK. Choose not to drink and drive and help others do the same.

The Policy Impact: Alcohol Impaired Driving brief was published in February 2011. Therefore, this web page is provided for reference purposes only. The most current CDC data can be found on the Impaired Driving: Get the Facts page.

Each year, millions of people choose to drive while under the influence of alcohol, sometimes with devastating results. These deaths and injuries are preventable. Research has identified proven policies that can keep alcohol-impaired drivers off the road and save thousands of lives each year.