Every day, 29 people in the United States die in motor vehicle crashes that involve an alcohol-impaired driver.1 This is one death every 50 minutes.1 The annual cost of alcohol-related crashes totals more than $44 billion.2

Thankfully, there are effective measures that can help prevent injuries and deaths from alcohol-impaired driving. 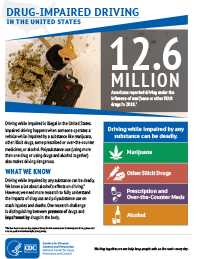 Working together, we can help keep people safe on the road – every day. Keep alcohol-impaired drivers off the road. The percentage of teens in high school who drink and drive has decreased by more than half since 1991, but more can be done. Drinking and Driving – A Threat to Everyone

US adults drank too much and got behind the wheel about 112 million times in 2010.