As noted in the 2021 National Academies of Sciences Engineering and Medicine report, Sexually Transmitted Infections: Adopting a Sexual Health Paradigmexternal icon, surveillance is key to understanding the magnitude of sexually transmitted infections in the United States and in subpopulations that are most affected.1 The 2020 STD Surveillance Report provides trends in STDs to describe current epidemiology of nationally notifiable STDs and inform prevention and control strategies. This overview summarizes national surveillance data for 2020 on the three notifiable diseases for which there are federally funded control programs: chlamydia, gonorrhea, and syphilis.

The COVID-19 pandemic has introduced uncertainty and difficulty in interpreting STD surveillance data collected during 2020 and trends presented in Sexually Transmitted Disease Surveillance, 2020 should be interpreted cautiously. For more information, please see Impact of COVID-19 on STDs.

In 2020, a total of 1,579,885 cases of Chlamydia trachomatis infection were reported to the CDC, making it the most common notifiable sexually transmitted infection in the United States for that year. This case count corresponds to a rate of 481.3 cases per 100,000 population, a decrease of 13% compared with the rate in 2019. During 2019–2020, rates of reported chlamydia decreased among both males and females, in all regions of the United States, and, except for rates among non-Hispanic persons of multiple races, among all racial/Hispanic ethnicity groups.

Decreases in rates of reported chlamydia in 2020 are unlikely due to a reduction in new infections. As chlamydial infections are usually asymptomatic, case rates are heavily influenced by screening coverage. During the COVID-19 pandemic, many health care clinics limited in-person visits to patients with symptoms or closed entirely, and it is likely that preventive health care visits where STD screening usually happens, such as annual reproductive health visits for young women, decreased. During the initial shelter-in-place orders in March and April of 2020, the number of chlamydia cases decreased substantially when compared to the number of cases reported in 2019 and the deficit persisted throughout the year. 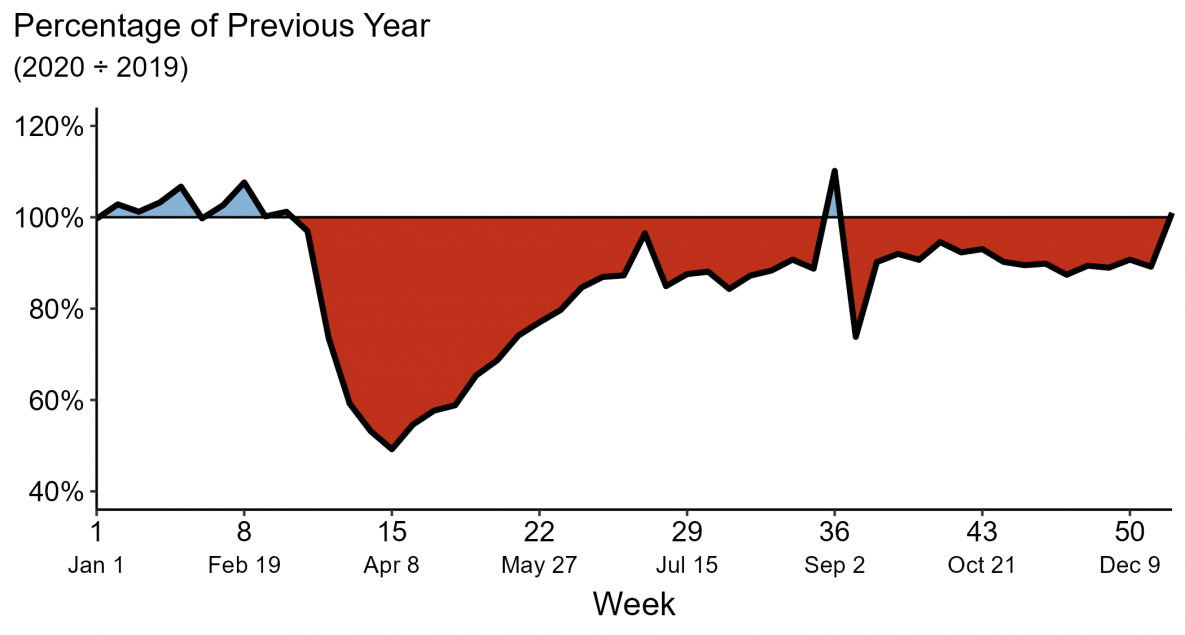 Chlamydia — Reported 2020 Cases as a Percentage of 2019 by MMWR Week, United States 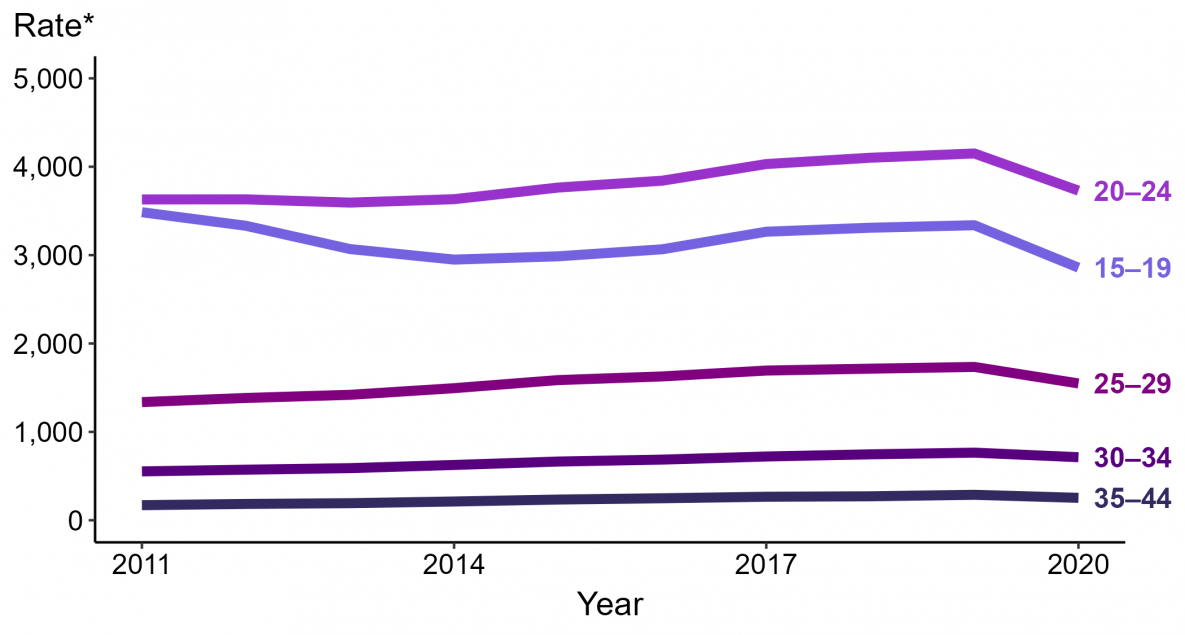 Rates of reported gonorrhea have increased since 2009 and since 2013, rates have been higher among men compared to women, likely reflecting cases identified in both men who have sex with men (MSM) and men who have sex with women only. Although there are limited data available on sexual behaviors of persons reported with gonorrhea at the national level, enhanced data from jurisdictions participating in a sentinel surveillance system, the STD Surveillance Network (SSuN), suggest that about a third of gonorrhea cases occurred among MSM in 2020. During 2019–2020, rates increased among both men and women, but increases were greater among women (15%) compared to men (6.6%) which may reflect differences in diagnosing and reporting of cases among MSM in 2020. As extragenital infections are often asymptomatic and are likely identified by screening, diagnoses among MSM may have been reduced in 2020 due to the effect of COVID-19 on screening coverage. 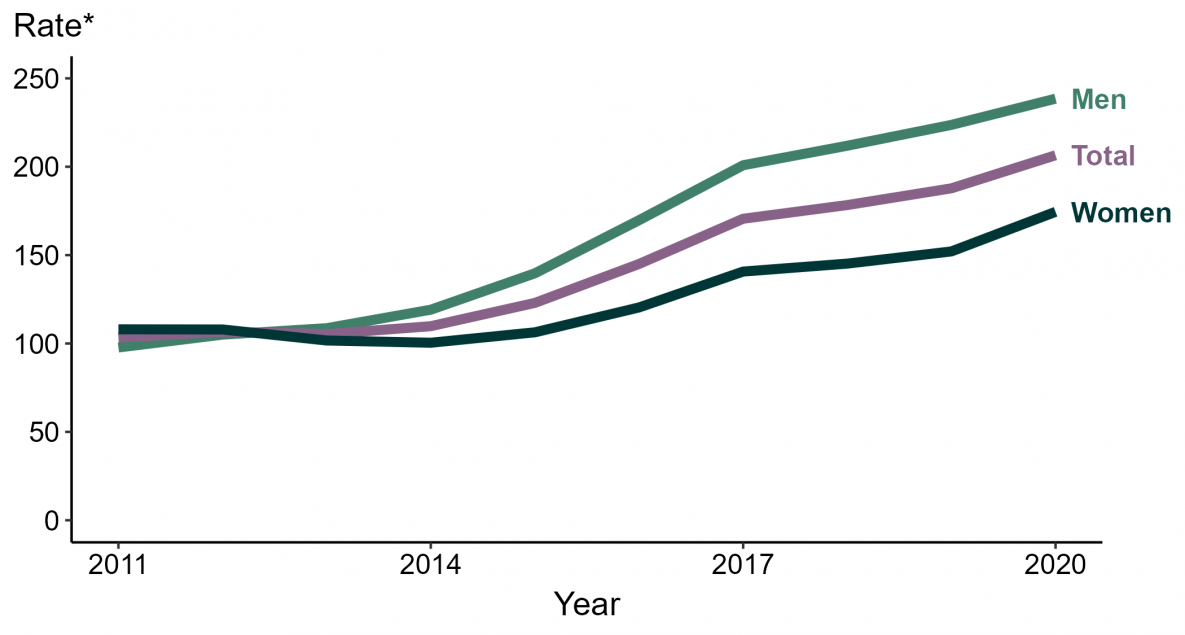 Gonorrhea can quickly develop resistance to antibiotics used to treat infection, and in 2020, about half of all infections were estimated to be resistant to at least one antibiotic. Since 2010, almost all circulating strains in the United States, based on gonococcal isolates collected through sentinel surveillance in the Gonococcal Isolate Surveillance Project (GISP), remain susceptible to ceftriaxone, the primary treatment for gonorrhea; only 0.1% of isolates displayed elevated ceftriaxone minimum inhibitory concentrations (MICs) in 2020. In 2020, 5.8% of isolates had elevated azithromycin MICs; the proportion was higher among MSM compared to men who have sex with women only (9.2% vs 4.3%).  Continued monitoring of susceptibility patterns to antibiotics is critical to inform gonorrhea treatment guidelines.

Despite significant disruptions in access to health care in 2020, most reported gonorrhea cases received the recommended treatment in jurisdictions participating in a sentinel surveillance system, the STD Surveillance Network (SSuN). In December of 2020, CDC released updated gonorrhea treatment guidelines, recommending a single 500 mg intramuscular dose of ceftriaxone for uncomplicated gonorrhea.2 Continued surveillance of treatment practices is a critical public health priority to help assure that patients receive the highest quality of care, and to address the emerging threat of antimicrobial-resistant gonorrhea. 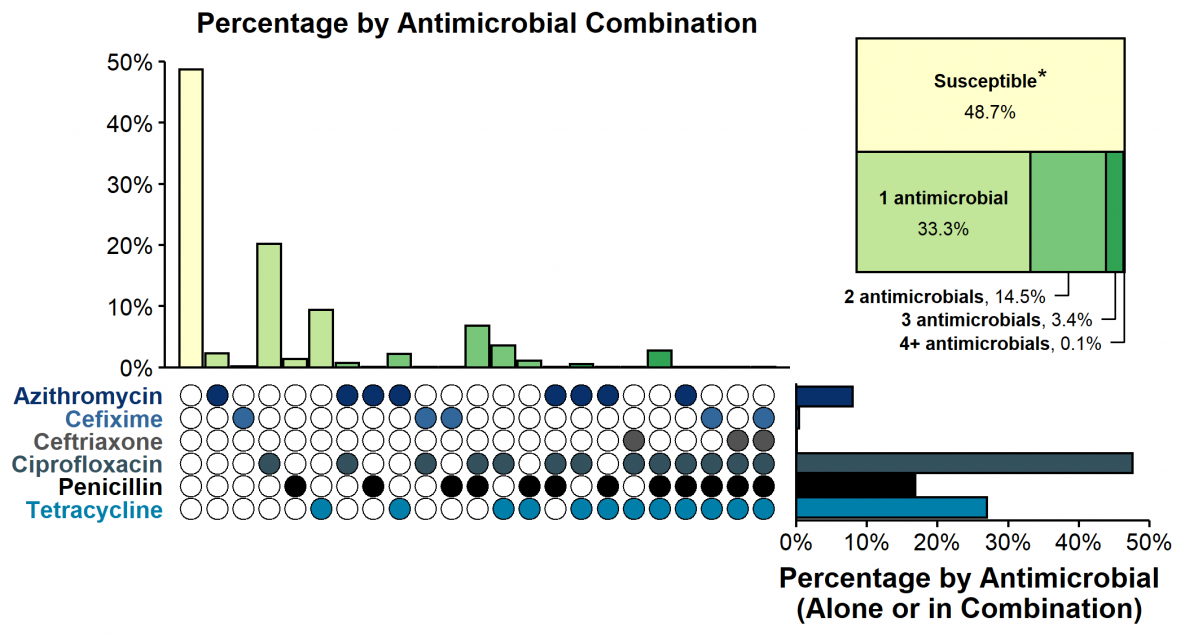 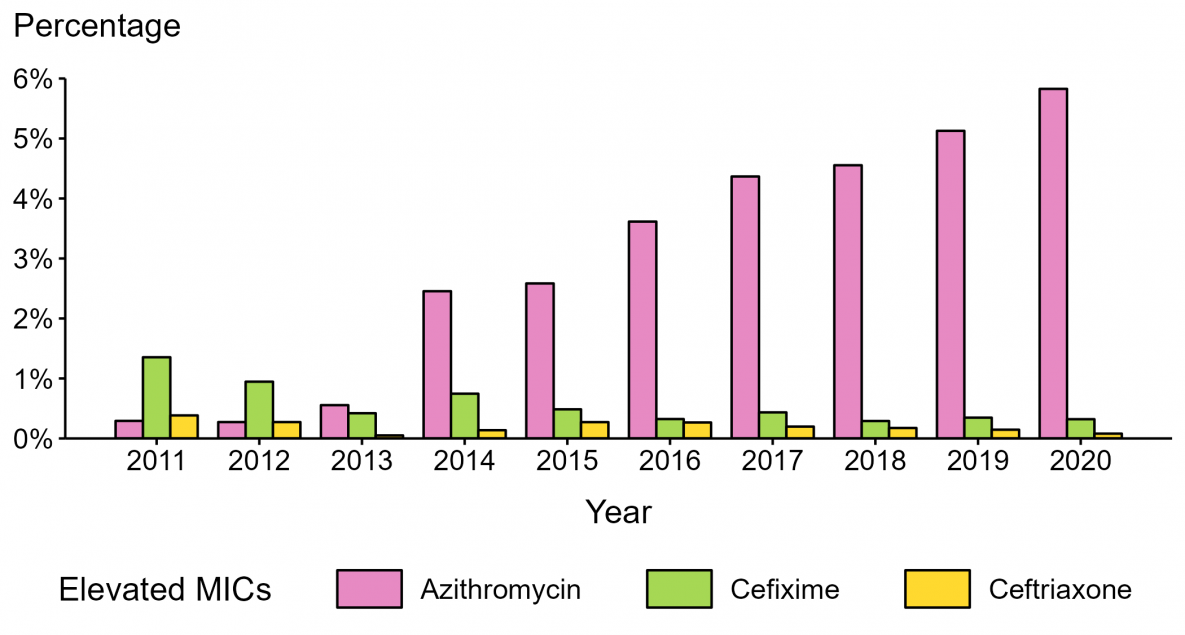 In 2020, 133,945 cases of all stages of syphilis were reported, including 41,655 cases of primary and secondary (P&S) syphilis, the most infectious stages of the disease. Since reaching a historic low in 2000 and 2001, the rate of P&S syphilis has increased almost every year, increasing 6.8% during 2019–2020. Rates increased among both males and females and in three regions of the United States (Midwest, Northeast, and South). Rates of P&S syphilis increased in most racial/Hispanic ethnicity groups, with greatest increases among non-Hispanic American Indian/Alaska Native persons and non-Hispanic persons of multiple races. 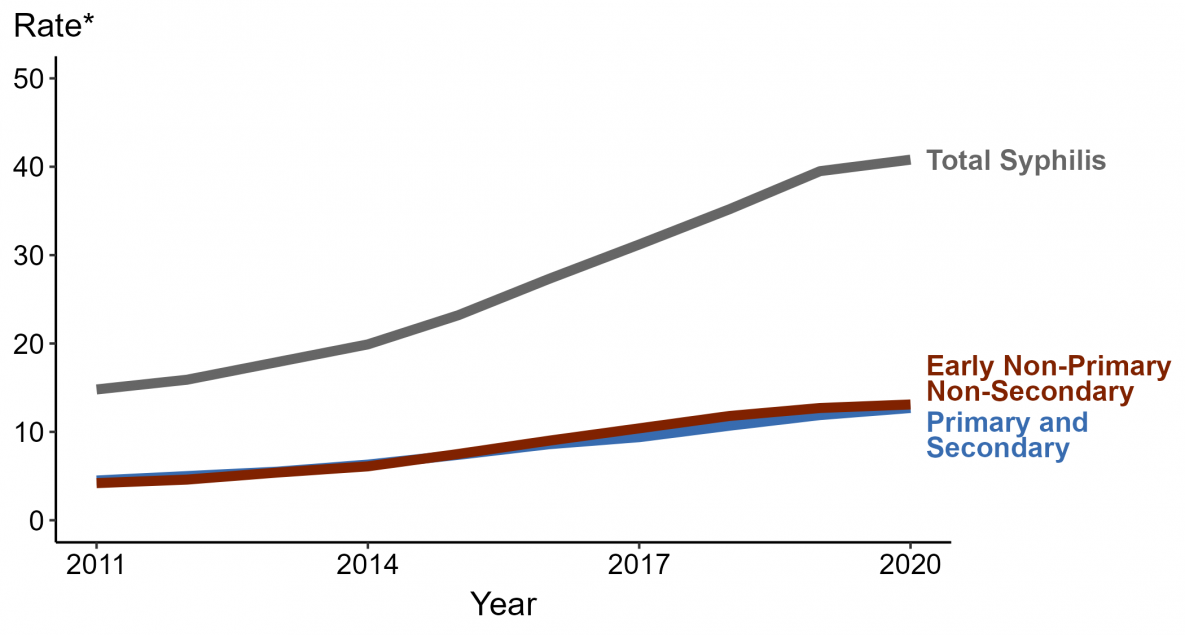 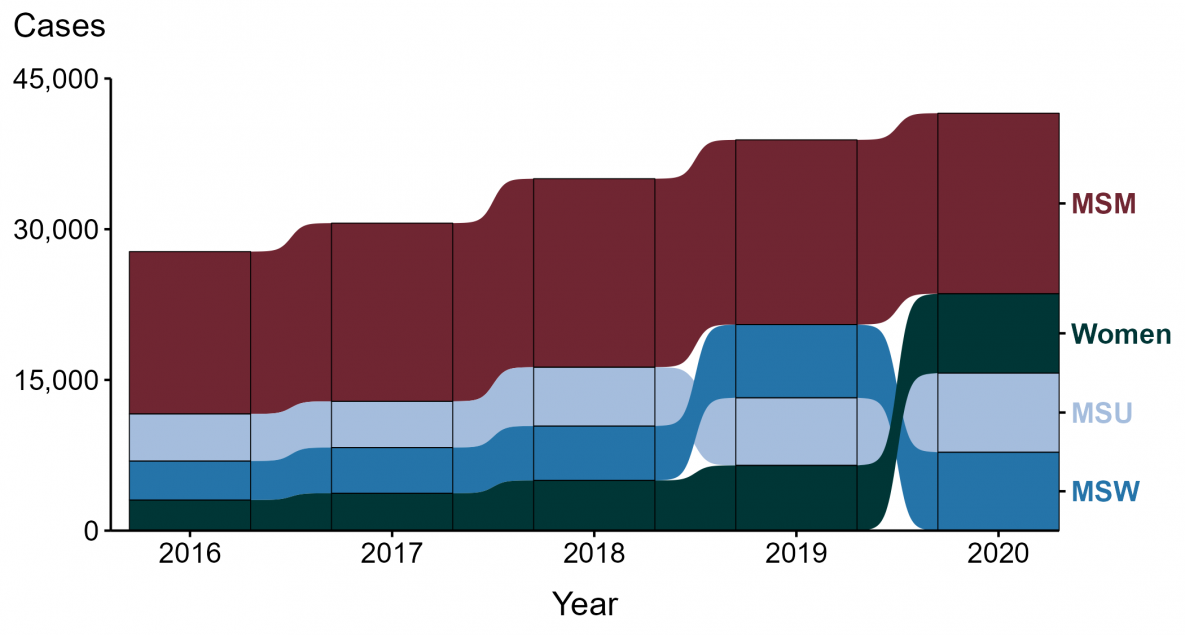 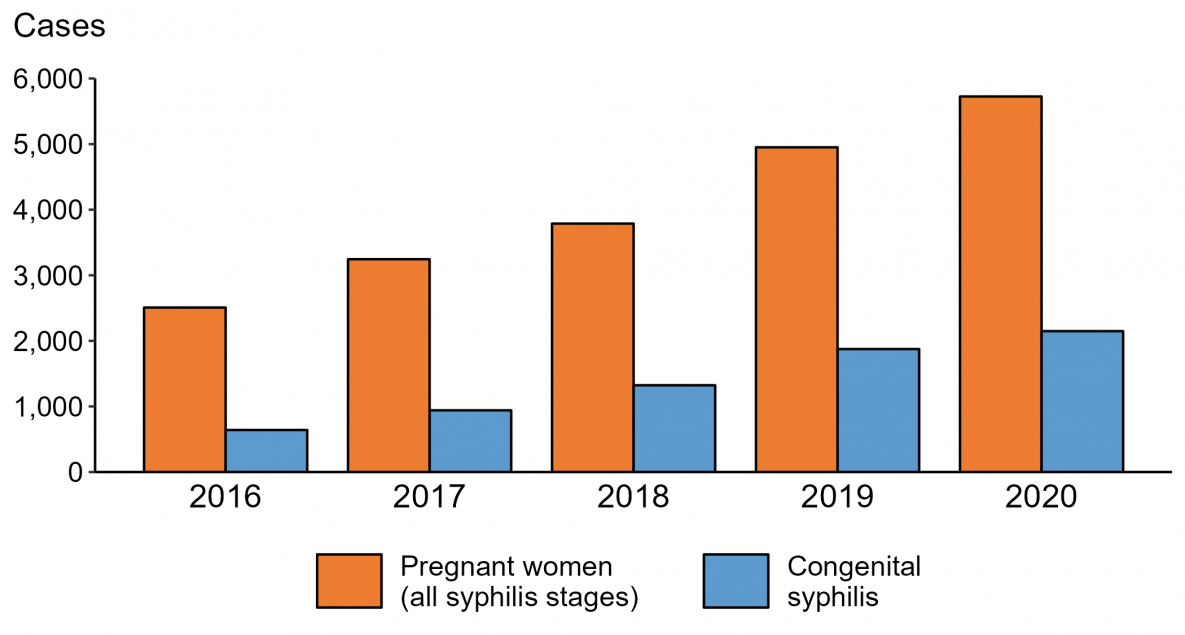 As in past years, there were significant disparities in rates of reported STDs. In 2020, over half (53%) of reported cases of STDs were among adolescents and young adults aged 15–24 years. Disparities continue to persist in rates of reported STDs among some racial minority or Hispanic groups when compared with rates among non-Hispanic White persons. In 2020, 32% of all cases of chlamydia, gonorrhea, and P&S syphilis were among non-Hispanic Black persons, even though they made up only approximately 12% of the US population.3 MSM are disproportionally impacted by STDs, including P&S syphilis and gonorrhea.

It is important to note that these disparities are unlikely explained by differences in sexual behavior and rather reflect differential access to quality sexual health care, as well as differences in sexual network characteristics. For example, in communities with higher prevalence of STDs, with each sexual encounter, people face a greater chance of encountering an infected partner than those in lower prevalence settings do, regardless of similar sexual behavior patterns. Acknowledging inequities in STD rates is a critical first step toward empowering affected groups and the public health community to collaborate in addressing systemic inequities in the burden of disease — with the ultimate goal of minimizing the health impacts of STDs on individuals and populations.