Endometriosis is a problem affecting a woman’s uterus—the place where a baby grows when a woman is pregnant. Endometriosis is when the kind of tissue that normally lines the uterus grows somewhere else. It can grow on the ovaries, behind the uterus, on the bowels, or on the bladder. Rarely, it grows in other parts of the body.

This “misplaced” tissue can cause pain, infertility, and very heavy periods. The pain is usually in the abdomen, lower back, or pelvic areas. Some women have no symptoms at all, and having trouble getting pregnant may be the first sign they have endometriosis. 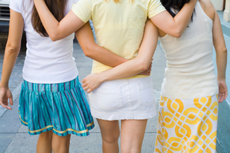 Uterine fibroids are the most common noncancerous tumors in women of childbearing age. Fibroids are made of muscle cells and other tissues that grow in and around the wall of the uterus, or womb. The cause of fibroids is unknown. Risk factors include being African-American or being overweight. The symptoms of fibroids include

But some women will have no symptoms. That is why it is important to see your health care provider for routine exams.

HIV can be spread through breast milk, so mothers in the US who have HIV should not breast-feed their babies.

HIV is the human immunodeficiency virus. HIV affects specific cells of the immune system (called CD4 cells). Over time, HIV can destroy so many of these cells that the body can’t fight off infection anymore. The human body cannot get rid of HIV—that means once a person has HIV, he or she has it for life. There is no cure at this time, but with proper medical care, the virus can be controlled. HIV is the virus that can lead to acquired immune deficiency syndrome, or AIDS. AIDS is the late stage of HIV infection, when a person’s immune system is severely damaged.

HIV in Women
Women who are infected with HIV typically get it by having sex with a man who is infected or by sharing needles with an infected person. Women of minority races/ethnicities are especially affected, and black or African American women are the most affected group.

Pregnant Women
All pregnant women should know their HIV status. Pregnant women who are HIV-positive can work with their health care providers to ensure their babies do not contract HIV during pregnancy, delivery, or after delivery (through breast milk). It is possible for a mother to have HIV and not spread it to her baby, especially if she knows about her HIV status early and works with her health care provider to reduce the risk.
Learn more from CDC’s Act Against AIDS campaign including how HIV is spread, and how to prevent HIV.

Interstitial cystitis (IC) is a chronic bladder condition resulting in recurring discomfort or pain in the bladder or surrounding pelvic region. People with IC usually have inflamed or irritated bladder walls that can cause scarring and stiffening of the bladder. IC can affect anyone; however, it is more common in women than men. Some people have some or none of the following symptoms:

Polycystic ovary syndrome happens when a woman’s ovaries or adrenal glands produce more male hormones than normal. One result is that cysts (fluid-filled sacs) develop on the ovaries. Women who are obese are more likely to have PCOS. Women with PCOS are at increased risk of developing diabetes and heart disease. Symptoms may include

STDs are infections that you can get from having sex with someone who has the infection. The causes of STDs are bacteria, parasites, and viruses. There are more than 20 types of STDs. Read more about specific STDs from these CDC fact sheets.
Most STDs affect both men and women, but in many cases the health problems they cause can be more severe for women. If a pregnant woman has an STD, it can cause serious health problems for the baby.

If you have an STD caused by bacteria or parasites, your health care provider can treat it with antibiotics or other medicines. If you have an STD caused by a virus, there is no cure, but antiviral medication can help control symptoms. Sometimes medicines can keep the disease under control. Correct usage of latex condoms greatly reduces, but does not completely eliminate, the risk of catching or spreading STDs.

Sexual Violence (SV) is a significant problem in the United States. SV refers to sexual activity where consent is not obtained or freely given. Anyone can experience SV, but most victims are female. The person responsible for the violence is typically male and is usually someone known to the victim. The person can be, but is not limited to, a friend, coworker, neighbor, or family member. Learn more about sexual violence risk and protective factors. The ultimate goal is to stop sexual violence before it begins.

Intimate partner violence (IPV) is a serious, preventable public health problem that affects millions of Americans. The term intimate partner violence describes physical, sexual, or psychological harm by a current or former partner or spouse. This type of violence can occur among heterosexual or same-sex couples and does not require sexual intimacy.

Find a Health CenterExternal
Health Resources Services Administration (HRSA) health centers care for you, even if you have no health insurance. You pay what you can afford, based on your income.