2017 Conference on Retroviruses and Opportunistic Infections

February 15, 2017 – New data signals HIV prevention and treatment efforts in the U.S. are paying off

CDC released estimates of the number of annual HIV infections (HIV incidence) in the United States – overall and by transmission group – at the Conference on Retroviruses and Opportunistic Infections on Feb. 14, 2017, in Seattle. After remaining stable since the mid-1990s, the estimated number of annual HIV infections in the U.S. fell 18% between 2008-2014. These estimates provide the most up-to-date picture of HIV trends in the United States. Additionally, research from a joint study by The Rollins School of Public Health at Emory University and CDC suggests that for gay and bisexual men, pre-exposure prophylaxis (PrEP) for HIV prevention, along with testing for and treatment of sexually transmitted infections (STIs), can reduce not only HIV, but also some STIs, even in the presence of some reductions in condom usage.

Estimated New HIV Infections in the US by Transmission Route 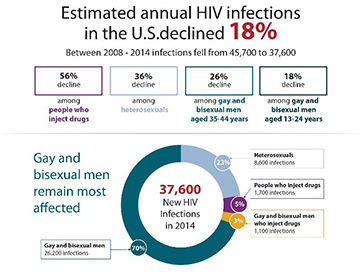 View High Resolution Version
After remaining stable since the mid-1990s, the estimated number of annual HIV infections in the U.S. fell nearly 20% between 2008-2014 (from 45,700 to 37,600). However, HIV remains a serious health problem in the U.S., with gay and bisexual men bearing the greatest burden by risk group.

Estimated New HIV Infections in 2014, Nationally and by State 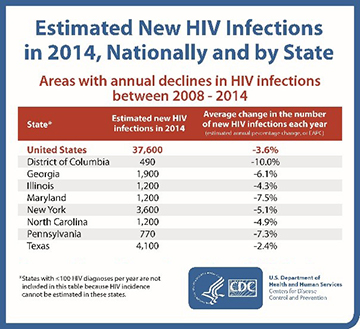 View High Resolution Version
The most recent analysis of the number of new HIV infections estimated to occur each year in the U.S. provides a sign of progress in HIV prevention. In addition to the national decline, CDC researchers did not find any increases in annual HIV infections in the 35 states and Washington, D.C., where annual HIV infections could be estimated — they decreased or remained stable in all of those areas.