November 28, 2017 – Frequency of HIV Testing and Time from Infection to Diagnosis Improve

A new CDC Vital Signs report published today finds that HIV is being diagnosed sooner after infection than was previously reported. The analysis includes the latest data on HIV testing frequency among Americans at increased risk of infection and on how long people are living with HIV before they find out they have it.

The following graphic highlight major findings from CDC’s analysis. These high-resolution, public domain images are ready to download and print in your publication. Click on a graphic to see it in high-resolution. 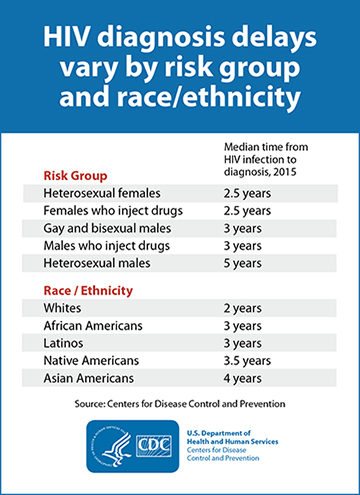 View High Resolution Version
In 2015, estimated timing from HIV infection to diagnosis varied by risk group and by race/ethnicity. 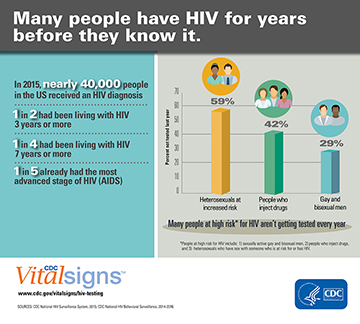 View High Resolution Version
In 2015, nearly 40,000 people in the U.S. received an HIV diagnosis. While the median time from HIV infection to diagnosis has declined, half of Americans with HIV diagnosed in 2015 had been living with HIV for at least 3 years, and a quarter had been infected for seven or more years.