STDs Reported in the United States, 2014

Today, CDC released its 2014 STD Surveillance Report, which finds that overall reported cases of chlamydia, gonorrhea, and syphilis have all increased for the first time since 2006.

Please note that this animated infographic is for media use/reprint. If you are a member of the general public and seek additional information about STDs, please visit www.cdc.gov/std. If you have additional questions, please call 1(800) CDC INFO or email CDC-INFO. 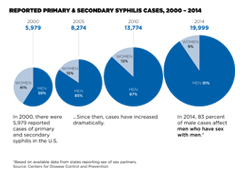 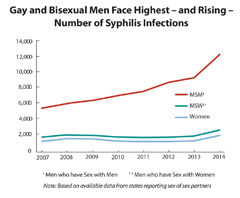 Gay and Bisexual Men Face Highest – and Rising – Number of Syphilis Infections
View High Resolution VersionCdc-image
Trend data show rates of syphilis are increasing at an alarming rate (15.1 percent in 2014). Men account for more than 90 percent of all primary and secondary syphilis cases and men who have sex with men (MSM) account for 83 percent of male cases where the sex of the sex partner is known. Primary and secondary syphilis are the most infectious stages of the disease, and if not adequately treated, can lead to visual impairment and stroke.

Most Reported Chlamydia and Gonorrhea Infections Occur among 15-24-Year-Olds
View High Resolution VersionCdc-image
While sexually transmitted diseases affect individuals of all ages, STDs take a particularly heavy toll on young people. Surveillance data shows both the numbers and rates of reported cases of chlamydia and gonorrhea continues to be highest among young people aged 15-24.