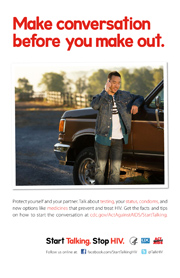 The Centers for Disease Control and Prevention today launched Start Talking. Stop HIV., a new national communication campaign encouraging gay and bisexual men to talk openly with their sexual partners about HIV risk and prevention strategies. Although research suggests that open communication leads to behaviors that can help reduce risk, such as HIV testing and status disclosure, studies have found that important discussions about HIV do not occur within many relationships.

“Given the range of HIV prevention options available today, talking about HIV prevention has never been more important for gay and bisexual men,” said Jonathan Mermin, M.D., M.P.H., director of CDC’s National Center for HIV/AIDS, Viral Hepatitis, STD, and TB Prevention. “Only after having open and honest conversations can partners make informed choices about which strategies will work for them. Start Talking. Stop HIV. urges gay and bisexual men to break the silence and take control of their health.”

Men who have sex with men (MSM) – including those who inject drugs — continue to be the group most severely affected by HIV in the United States, accounting for more than half (57 percent) of the 1.1 million people living with HIV and approximately two-thirds (66 percent) of all new HIV infections each year. Young (ages 13-24) MSM, especially young black MSM, are at particularly high risk for HIV. Despite this heavy burden, a recent CDC study of gay and bisexual men in 20 cities found that 37 percent did not know the HIV status of their last male partner.

Start Talking. Stop HIV., created in consultation with more than 500 gay and bisexual men, is designed to reach gay and bisexual men of all races and ethnicities in all types of relationships, from casual to long-term. Featuring real-world individuals and couples, the campaign – which includes online and print advertisements, as well as social media outreach and online videos — encourages gay and bisexual men to talk to their sexual partners about HIV testing and their HIV status; safer sex, including using condoms and engaging in lower risk sexual behaviors; medicines that can prevent and those that can successfully treat HIV; and healthy relationships.

The Start Talking. Stop HIV. campaign website features information and resources as well as practical tips for starting conversations about safe sex and HIV. The campaign will also be featured at gay pride events and other community activities across the country.

“Talking to your partner about HIV is one of the most important conversations you can have, but it’s not always an easy one,” said Scott Johnson, a campaign participant. “To anybody getting into a new relationship: Start talking immediately. There’s no reason to be embarrassed or silent about anything.”

Start Talking. Stop HIV. is the latest campaign of CDC’s Act Against AIDS initiative, a national communication campaign to combat complacency about HIV in the United States. The campaign helps advance the National HIV/AIDS Strategy, which calls for decreasing the number of new infections, reducing stigma and discrimination against people living with HIV, and educating Americans about the threat of HIV and how to prevent it. Other elements of the Act Against AIDS initiative include Reasons/Razones, a campaign targeted to Latino gay and bisexual men, and Testing Makes Us Stronger, a campaign targeted to African American gay and bisexual men.