Click on a graphic to see it in high-resolution.

Images and graphics highlighting major findings of the report are available for download. These high-resolution, public domain images are ready to print in your publication.

These images are in the public domain and are thus free of any copyright restrictions. As a matter of courtesy, we request that the content provider be credited and notified of any public or private usage of an image. 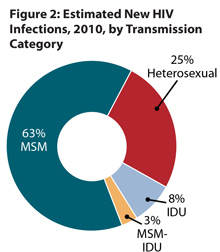 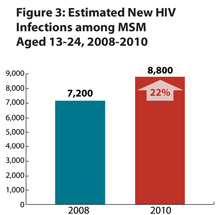 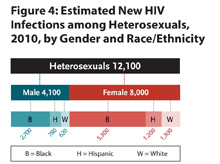 Estimated New HIV Infections among Heterosexuals, 2010, by Gender and Race/Ethnicity
View High Resolution Version
Heterosexuals accounted for 25 percent of estimated new HIV infections in 2010 (12,100). About two-thirds (66 percent) of those infected through heterosexual sex were women. 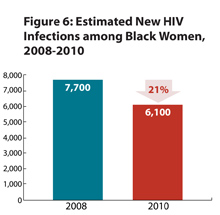 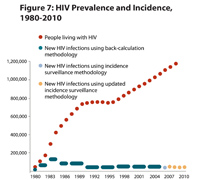 HIV Prevalence and Incidence, 1980-2010
View High Resolution Versionimage icon
Although persisting at far too high a level (approximately 50,000 infections per year), HIV incidence has been reduced by more than two-thirds since the height of the U.S. HIV epidemic, and HIV prevention efforts are estimated to have averted more than 350,000 HIV infections in the United States to date. Additionally, despite continued increases in the number of people living with HIV over the past decade (about 1.1 million people living with HIV today), new HIV infections have not increased, indicating that HIV testing, prevention, and treatment programs are effectively reducing the rate of transmission overall.