Health disparities are differences in the incidence, prevalence, and mortality of a disease and the related adverse health conditions that exist among specific population groups. These groups may be characterized by gender, age, race or ethnicity, education, income, social class, disability, geographic location, or sexual orientation. These health disparities are one reason why HIV/AIDS, viral hepatitis, STDs, and TB take a greater toll in one population group over another. Find information about how these diseases affect African American/Black populations. 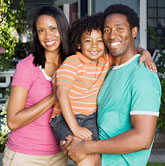 In 2013, the death rate for blacks was higher (19.4 per 100,000) compared with any other racial ethnicity group (2.5 whites). In 2013, African Americans represented 47% of all estimated deaths of people ever diagnosed with HIV. (Note that deaths could be from any cause). A recent study showed that blacks diagnosed with HIV are less likely than other groups to be linked to care, retained in care, receive antiretroviral treatment and achieve adequate viral suppression.

Among African American women in the United States and six dependent areas, heterosexual contact was the most frequently cited mode of transmission, accounting for 91% of cases diagnosed in 2014.

During the past 5 years, there has been little difference between the rates of acute hepatitis A among white non-Hispanics and black non-Hispanics. The 2014 rates for these groups were 0.28 and 0.20 cases per 100,000 population, respectively.