Health disparities are differences in the incidence, prevalence, and mortality of a disease and the related adverse health conditions that exist among specific population groups. These groups may be characterized by gender, age, race or ethnicity, education, income, social class, disability, geographic location, or sexual orientation. These health disparities are one reason why HIV/AIDS, viral hepatitis, STDs, and TB take a greater toll in one population group over another. Find information about how these diseases affect Asian populations. 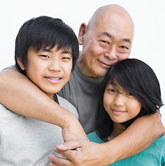 In 2014, the rate of acute hepatitis B was lowest for Asian/Pacific Islanders and Hispanics (0.29 cases per 100,000 population for each group.

In 2014, among the 1784 cases for whom race/ethnicity was known, Asian/Pacific Islanders accounted for the highest number of chronic HBV cases (n=1,784, 60%) reported from all 7 funded sites .

Overall, 9,421 TB cases were reported to CDC from the 50 states and the District of Columbia in 2014. In 2014, Asians accounted for 32% of the total number of reported TB cases in the United States. Asians born outside the United States represented 46% of the TB cases among foreign-born persons in 2014.