Lead can be found in some consumer products made in other countries and then imported into the United States. Lead can also be found  in collectible items no longer produced in the U.S. but passed down through the generations.

How children may be exposed 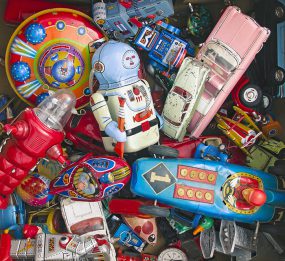 The use of lead in plastics has not been banned. Lead softens the plastic and makes it more flexible so that it can go back to its original shape. It may also be used in plastic toys to stabilize molecules from heat. Lead dust can be formed when plastic is exposed to sunlight, air, and detergents that break down the chemical bond between the lead and plastics.

Lead is also used in making alloys with other metals such as antimony, tin, arsenic, and calcium which are the most common alloying elements.

Young children tend to put their hands, toys, or other objects, which may be made of or contaminated with lead, into their mouths. If you have a small child in your household, make sure the child does not have access to toys, jewelry or other items that may contain lead.

Lead may be found in the paint on toys which was banned in the U.S. but is still widely used in other countries. Lead may also be found on older toys made in the U.S. before the ban or antique toys and collectibles passed down through generations.

If swallowed or put in the mouth, lead jewelry is hazardous to children. In 2003, a 4-year-old child swallowed a piece of jewelry bought from a vending machine. The child became ill because the jewelry was made of lead. The potential for children to be exposed to lead from jewelry led the U.S. Consumer Product Safety Commission (CPSC) to issue a recall on July 8, 2004, of 150 million pieces of metal toy jewelry sold widely in vending machines.

In 2006, a child died from acute lead poisoning after eating a heart-shaped metallic charm containing lead. The charm had been attached to a metal bracelet provided as a free gift with the purchase of shoes manufactured by Reebok International Ltd. On March 23, 2006, CPSC and Reebok announced a voluntary recall of 300,000 heart-shaped charm bracelets.

Just wearing toy jewelry will not cause your child to have a high level of lead in their blood. However, small children often put things in their mouth. If you have a small child in your household, make sure the child does not have access to jewelry or other items that may contain lead.

Get photos of the recalled jewelry or more information on recalls from the CPSCexternal icon website or 1-800-638-2772. CPSC also has a new policyexternal icon addressing lead in children’s metal jewelry.

Get your child tested for lead exposure

Only a certified laboratory can accurately test products for lead content. Although do-it-yourself kits are available, they do not show how much lead is present and their reliability at detecting low levels of lead has not been determined.