Related Pages
In April 2006, the World Health Organization (WHO) released a new international growth standard for young children aged birth to 5 years. This standard describes the growth of healthy children living in well-supported environments in six countries, including the United States. The standard shows how infants and children should grow rather than simply how they do grow in a certain time and place. 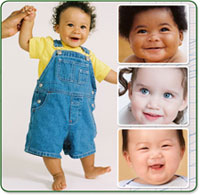 Similar to the CDC growth reference charts, the WHO growth standard charts describe weight-for-age, length (or stature)-for-age, weight-for-length, and BMI-for-age. The WHO standards are relevant to infants and young children in the United States because they were included in the WHO study sample, and their growth tracks along the median of the pooled international sample.2-3