Breastfeeding as the Norm for Infant Feeding

The growth patterns of breastfed and formula-fed infants are different. For example,

Linear growth generally follows a similar pattern for both breastfed and formula-fed infants. 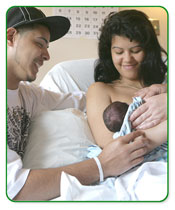 The WHO growth standard charts consider the effect of infant feeding on growth by using breastfeeding as the norm.

When the WHO growth curves were created, the differences in growth patterns of breastfed and formula-fed infants were considered.3

The breastfed infant is the reference or normative model against which alternative feeding methods are measured with regard to growth, healthy development, and all other short-term and long-term outcomes.4

This is consistent with U.S. dietary reference intakes, in which norms for infant intakes of most nutrients are determined on the basis of the composition of human milk and the average volume of human milk intake.5

CDC growth reference charts were developed to represent all infants in the United States. Feeding criteria were not identified.

The CDC growth reference charts are based on primarily formula-fed infants.

In the United States most infants start to breastfeed.6