Creating the WHO Growth Standard for Infants and Young Children

In 1993, WHO established a working group on infant growth to conduct a comprehensive review of the uses and interpretation of the 1977 National Center for Health Statistics (NCHS)/WHO growth reference, which had been recommended for international use since the late 1970s.1

The experts on the working group concluded that 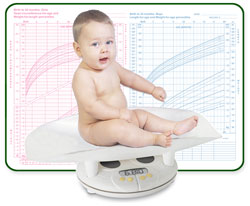 The outcome of the recommendations was the WHO Multicenter Growth Reference Study (MGRS) on which the WHO growth standards are based.

The MGRS was conducted from 1997 to 2003 in six sites (Pelotas, Brazil; Accra, Ghana; Delhi, India; Oslo, Norway; Muscat, Oman; and Davis, California) to generate new growth curves to assess growth of infants and young children throughout the world.

A primary study hypothesis was that infants and young children have the potential to grow similarly, regardless of their race/ethnicity and place of birth, if they are breastfed, living in a healthy environment, and have adequate nutrition.

This hypothesis of similar growth was confirmed as the mean length measurements from birth up to 24 months in the 6 country sites were virtually identical.