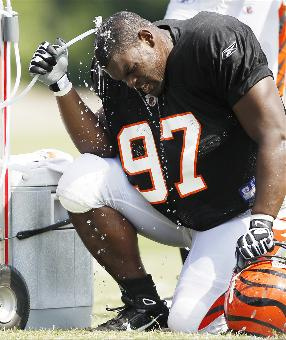 “I am the oldest of three children and the only one with sickle cell trait. The first time I learned I carry the sickle cell trait was as a freshman at the University of Georgia. I called home and my mother said, “Your dad has the trait, but I don’t recall the doctor saying you had the trait when you were born.” All newborns are tested for the trait in Florida, yet I had gone my whole life without knowing.

“Once I learned I had the trait I researched as much as I could and talked with the football training staff. They assured me that the trait would not affect my ability to play. There were four freshmen who tested positive for the trait along with me and we were assigned a trainer who watched us closely during practice sessions and on game day. I was not treated differently by my teammates and went about my life just as I had before. One day I learned that a football player had died from complications of sickle cell trait while participating in spring practice at another university. That’s when I realized that this is a serious issue and I should not take any chances with my health. I played at the highest level in college and it earned me a spot in the NFL.

“I knew from my research that it would not be good for me to play in high altitude, so I prayed I wouldn’t get drafted by Denver, which is at a high altitude. I ended up in Cincinnati and have played at a very high level without any adverse affects of the sickle cell trait. During the 2011 season we did travel to Denver to play the Broncos and that was the first time I can truly say I felt the effects of the trait. I could not breathe after a 10-play series and had to be given oxygen on the sideline.

“Some of the changes I’ve made in my life include eating healthy, avoiding drugs and alcohol, not smoking, and most importantly getting a lot of rest. Everyone in my family knows that I have to take my daily nap. I drink more water, sports drinks, and coconut water than ever before because it is important to stay well hydrated before and after activities.

“Having the sickle cell trait does not exclude an athlete from participating in sports, however, the training staff and coaches need to take precautions to ensure the athlete is not put in dangerous situations. In high school my coaches would get on me because I was always in the back during running drills and I often got very tired. I think back now and realize that it could have been a dangerous situation for me if over-zealous coaches or I had pushed too much during those hot days in south Florida.

“Each year I am saddened to learn of another young athlete dying from complications of the trait while participating in sports. This vicious cycle lets me know that not enough information, education, and spotlight are given to this issue. My goal is to start a foundation, with the primary focus on offering testing for athletes at the high school level and getting education for trainers and coaches on how to help the athletes be the best they can be.”

CDC would like to thank Geno Atkins for sharing his personal story.