Craniosynostosis is a birth defect in which the bones in a baby’s skull join together too early. This happens before the baby’s brain is fully formed. As the baby’s brain grows, the skull can become more misshapen. To learn what it’s like to live with this condition or how families are affected, read this real story from people living with craniosynostosis.

Deborah's Story - In her own words 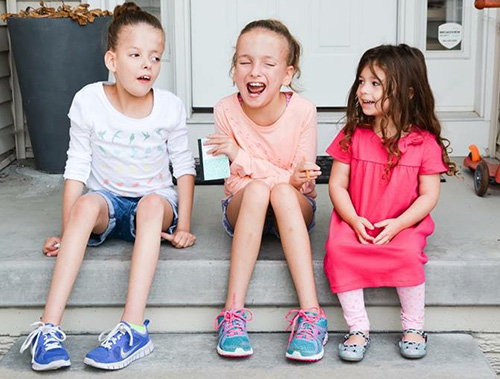 Connecting to care is vital for children with birth defects. This was especially true for Deborah, who has twin girls born with craniosynostosis. Read below to learn about their journey to get needed care, treatment, and services.

During my pregnancy with my twin girls, I had all of the prenatal testing and care, and I was prepared for two healthy babies. When the twins were born full-term, they went immediately to a neonatal intensive care unit (NICU) and stayed there for about two weeks. My family and I soon noticed that the appearance of their skulls seemed atypical. However, when we asked the doctors, quite often actually, we were told that there was no cause for concern.

When the twins came home, they seemed unresponsive and floppy. Their faces became more and more asymmetrical throughout their first two months. During this time, my family and I went to several pediatricians. We asked about their unresponsiveness and facial asymmetry. Again, were told that there was no cause for concern. Frantic, I got on the internet and started to look up these two symptoms and discovered something called craniosynostosis. Craniosynostosis is a birth defect in which the bones in a baby’s skull join together too early. This can limit or slow the growth of a baby’s brain. Right then, I felt in my gut that this was what was going on with my kids. I got on an online forum and started asking for advice. I posted pictures of the girls, and all of the forum members encouraged me to send the photos to various specialists across the country.

Fifteen minutes later, I got a response from a surgeon at the Mayo Clinic asking how soon we could be there. Fortunately, my parents were able to help me, and we got in a week later. When the doctor saw the girls, he immediately went into action. He scheduled one of the twins (the more affected one) for more scans of her skull and eventually, for two surgeries to release the sutures, the spaces between her skull bones that had already fused. He sent the other twin for cranio-banding, which is a helmet she had to wear to shape her head and reduce asymmetry. He also noted their floppiness and sent them to physical and occupational therapy, as well as genetics, neurology, and quite a few other appointments.

One of the appointments was with a licensed social worker. She was the integral point of access for our family. She told us about Medicaid, Social Security, and Early Interventionexternal icon. She really got the ball rolling for us. Through several moves across multiple states, she has helped me access and navigate different programs in the different places we lived. Through those experiences, I began to explore what worked for us and what didn’t. From that point on, my girls were getting the services they needed. Even though there is no official reason or diagnosis that caused their sutures to fuse (and then restricted their brains from developing), our social worker and neurologist helped me access forms and waivers we needed to get them adequate medical equipment that they would need as they got older.

We are still learning as we go, but I am thankful for both the online forum and resources I found. I’m also extremely grateful for the social worker and her invaluable guidance on our journey!