Mark’s Story—Written by his sister, Sonja 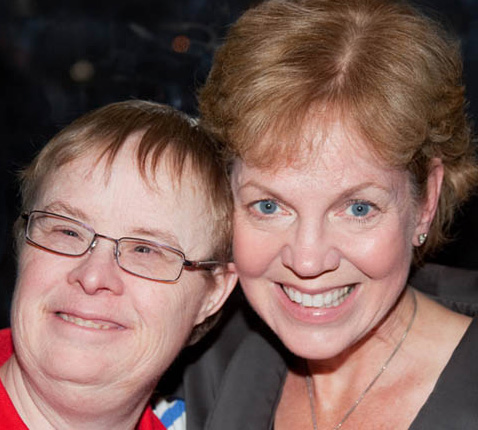 Mark is an adult living with Down syndrome.  He lives a happy and worthwhile life, proud of his work and secure in the love of his family and friends.  His sister shares more of his inspiring story below.

Employed, living independently, an active member of his community — it would have been hard to imagine that these words would ever describe my brother Mark when he was born with Down syndrome in 1960. The doctor’s advice at the time was typical of the era. “Institutionalize him,” he said. “It’s best for your family.” My parents ignored that advice, took Mark home — and found a new doctor.

Our family is justifiably proud of all that Mark has accomplished since then, often confounding the experts of the day. Our small town in Minnesota didn’t have any educational opportunities to offer Mark, so initially he was transported to a distant town for school. Over time, our local school system was able to accommodate him. At first only segregated classes for the “mentally retarded” (a term now considered to be offensive) were offered – and kids were divided into classes based on whether they were labeled as “educable” or “trainable” (also now obsolete terms). But by the time Mark reached high school, he was included in some regular classes and participated in extracurricular activities, even serving as manager for the wrestling team – something that was practically unheard of at the time for a student with an intellectual disability. After high school, Mark moved into a brand new group home in our town. Three years later, he moved into his own apartment. He’s been living independently ever since, and working steadily at a local fast-food restaurant.

Mark has enriched my life in countless ways, including guiding my career path. When I was in high school, I was alarmed when my biology teacher said the average survival for persons with Down syndrome was 16 years (Mark was 14 at the time). My first goal was to become a genetic counselor; then I went back for training to become a pediatrician and clinical geneticist. After joining the Birth Defects Branch at CDC, one of my first projects was to examine survival among persons with Down syndrome — our study, published in Lancet in 2002, showed that survival was 49 years in 1997 (as estimated by median age of death from US death certificates).

While I’m delighted with Mark’s many personal triumphs, I’m also aware that there are lots of challenges ahead. I know, for example, that a significant proportion of people with Down syndrome develop Alzheimer’s disease. Thankfully, Mark doesn’t show any signs of it, but we monitor him closely – a task that might be easier if there were more health care providers in rural Minnesota knowledgeable about adults with Down syndrome. And Mark’s work situation always feels a little bit shaky. Even though he’s been a loyal employee for many years, he’s often the first to have his hours cut when college students come home for the summer or when the economy struggles. It’s not easy.

Yet Mark takes all this in stride. He leads a happy and worthwhile life, proud of his work and secure in the love of his family and friends. Every day, he tries to do his best in everything he does – which, of course, inspires everyone around him to try to do the same. Mark’s quite a guy — I’m lucky to be his sister!