Other Concerns and Conditions with ADHD

ADHD often occurs with other disorders. Many children with ADHD have other disorders as well as ADHD, such as behavior or conduct problems, learning disorders, anxiety and depression1,2.

Learn about how many children with ADHD have another disorder 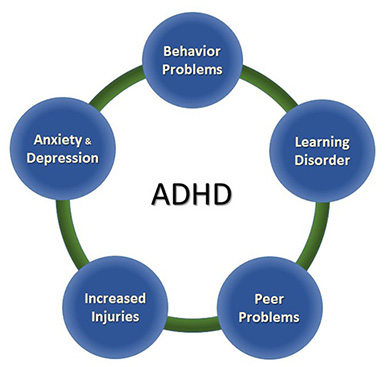 The American Academy of Pediatrics recommends

Every child with ADHD should be screened for other disorders and problems.

Read more about the recommendations here.

Children occasionally act angry or defiant around adults or respond aggressively when they are upset. When these behaviors persist over time, or are severe, they can become a behavior disorder. Children with ADHD are more likely than other children to be diagnosed with a behavior disorder such as Oppositional Defiant Disorder or Conduct Disorder.

When children act out persistently so that it causes serious problems at home, in school, or with peers, they may be diagnosed with Oppositional Defiant Disorder (ODD). ODD is one of the most common disorders occurring with ADHD. ODD usually starts before 8 years of age, but can also occur in adolescents. Children with ODD may be most likely to act oppositional or defiant around people they know well, such as family members or a regular care provider. Children with ODD show these behaviors more often than other children their age.

Conduct Disorder (CD) is diagnosed when children show a behavioral pattern of aggression toward others, and serious violations of rules and social norms at home, in school, and with peers. These behaviors can lead to breaking the law and being jailed. Having ADHD makes a child more likely to be diagnosed with CD. Children with CD are more likely than other children to get injured, and to have difficulties getting along with peers.

Starting treatment early is important. Treatment is most effective if it fits the needs of the child and family. The first step to treatment is to have a comprehensive evaluation by a mental health professional. Some of the signs of behavior problems, such as not following rules, are also signs of ADHD, so it is important to get a careful evaluation to see if a child has both conditions. For younger children, the treatment with the strongest evidence is behavioral parent training, where a therapist helps the parent learn effective ways to strengthen the parent-child relationship and respond to the child’s behavior. For school-age children and teens, an often-used effective treatment is combination training and therapy that includes the child, the family, and the school. Sometimes medication is part of the treatment.

Many children with ADHD also have a learning disorder (LD). This is in addition to other symptoms of ADHD, such as difficulties paying attention, staying on task, or being organized, which can also keep a child from doing well in school.

Having a learning disorder means that a child has a clear difficulty in one or more areas of learning, even when their intelligence is not affected. Learning disorders include

The combination of problems caused by having ADHD and LD can make it particularly hard for a child to succeed in school. Properly diagnosing each disorder is an important part of getting the right kind of help for the child. 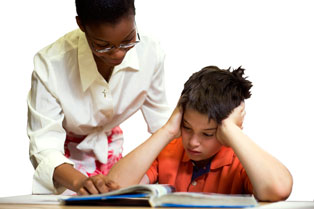 Children with learning disorders often need extra help and instruction that is specialized for them. Having a learning disorder can qualify a child for special education services in school. Because children with ADHD often have difficulty in school, the first step is a careful evaluation to see if the problems are also caused by a learning disorder. Schools usually do their own testing to see if a child needs intervention. Parents, healthcare providers, and the school can work together to find the right referrals and treatment.

Examples of anxiety disorders include

Occasionally being sad or feeling hopeless is a part of every child’s life. When children feel persistent sadness and hopelessness, it can cause problems. Children with ADHD are more likely than children without ADHD to develop childhood depression. Children may be more likely to feel hopeless and sad when they can’t control their ADHD symptoms and the symptoms interfere with doing well at school or getting along with family and friends.

Examples of behaviors often seen when children are depressed include

Children with ADHD often have a hard time focusing on things that are not very interesting to them. Depression can make it hard to focus on things that are normally fun. Changes in eating and sleeping habits can also be a sign of depression. For children with ADHD who take medication, changes in eating and sleeping can also be side-effects from the medication rather than signs of depression. Talk with your healthcare provider if you have concerns.

Extreme depression can lead to thoughts of suicide. Read more about suicide prevention.

Treatment for anxiety and depression

The first step to treatment is to talk with a healthcare provider to get an evaluation. Some signs of depression, like having a hard time focusing, are also signs of ADHD, so it is important to get a careful evaluation to see if a child has both conditions. A mental health professional can develop a therapy plan that works best for the child and family. Early treatment is important, and can include child therapy, family therapy, or a combination of both. The school can also be included in therapy programs. For very young children, involving parents in treatment is very important. Cognitive behavioral therapy is one form of therapy that is used to treat anxiety or depression, particularly in older children. It helps the child change negative thoughts into more positive, effective ways of thinking. Consultation with a health provider can help determine if medication should also be part of the treatment.

Learn more about anxiety and depression 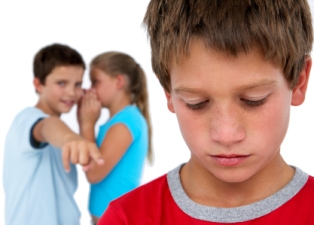 ADHD can make peer relationships or friendships very difficult. Having friends is important to children’s well-being and may be very important to their long-term development.

Although some children with ADHD have no trouble getting along with other children, others have difficulty in their relationships with their peers; for example, they might not have close friends, or might even be rejected by other children. Children who have difficulty making friends might also more likely have anxiety, behavioral and mood disorders, substance abuse, or delinquency as teenagers.

How does ADHD interfere with peer relationships?

Exactly how ADHD contributes to social problems is not fully understood. Children who are inattentive sometimes seem shy or withdrawn to their peers. Children with symptoms of impulsivity/hyperactivity may be rejected by their peers because they are intrusive, may not wait their turn, or may act aggressively. In addition, children with ADHD are also more likely than those without ADHD to have other disorders that interfere with getting along with others.

Having ADHD does not mean a child won’t have friends.

Not everyone with ADHD has difficulty getting along with others. For those children who do have difficulty, many things can be done to help them with relationships. The earlier a child’s difficulties with peers are noticed, the more successful intervention may be. Although researchers don’t have definitive answers on what works best for children with ADHD, some things parents might consider as they help their child build and strengthen peer relationships are: 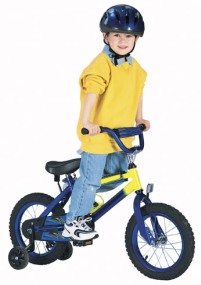 More research is needed to understand why children with ADHD get injured, but it is likely that being inattentive and impulsive puts children at risk. For example, a young child with ADHD may not look for oncoming traffic while riding a bicycle or crossing the street, or may do something dangerous without thinking of the possible consequences. Teenagers with ADHD who drive may take unnecessary risks, may forget rules, or may not pay attention to traffic.

Children with ADHD have increased risk of injury to the mouth and teeth, as well as cavities (also known as caries or tooth decay). Learn about protecting children’s oral health.

The core symptoms of ADHD, like impulsivity and inattention, might lead children to behave in ways that can put their health at risk or cause them to forget healthy and protective behaviors. Over time, if not addressed, these risks can lead to injury, disease, or even an earlier-than-expected death. In addition to injuries, children with ADHD are at increased risk for being overweight or having obesity. Healthy habits for children include:

Learn more about protecting the health of children with ADHD