ADHD Throughout the Years

The percent of children estimated to have ADHD has changed over time and its measurement can vary. The first national survey that asked parents about ADHD was completed in 1997. Since that time, there has been an upward trend in national estimates of parent-reported ADHD diagnoses across different surveys, using different age ranges. It is not possible to tell whether this increase represents a change in the number of children who have ADHD, or a change in the number of children who were diagnosed. However, the most recent estimates are consistent with previous estimates. Future data will show whether the upward trend across the two decades is leveling out.

(Percent of children with a parent-reported ADHD diagnosis) 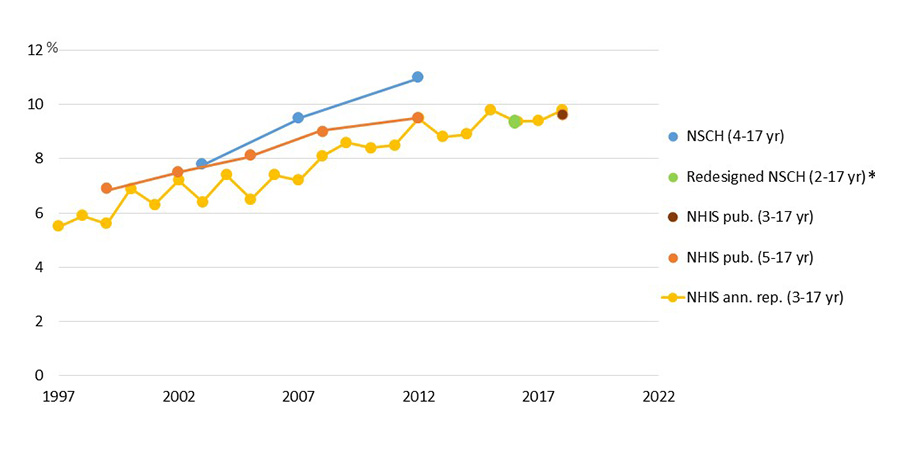 Note: Age ranges for published data vary. In previous decades, the focus of information collected on ADHD generally was on school age children; this has been expanded to include preschool ages as young as 2 years of age. Because the number of children with ADHD increases with age, estimates that include younger children are likely to be somewhat lower than those that focus on older children.

Estimates for the percent of children in the population who have ADHD vary widely across time and across survey methods. A historical view can provide necessary context to understand changes in the epidemiology of ADHD. The way that ADHD is diagnosed has changed over time, so the difference in these numbers is likely to be influenced by variations in how the diagnostic criteria were applied. In addition, there were differences in the demographic characteristics of the samples used to calculate the estimates. It is also possible that the samples were exposed to factors that affect ADHD, but until more is known about these factors, it is not possible to know whether changes in these factors explain some of the variation. Perhaps relatedly, the number of FDA-approved ADHD medications increased noticeably since the 1990s, after the introduction of long-acting formulations.

The historical timeline below shows 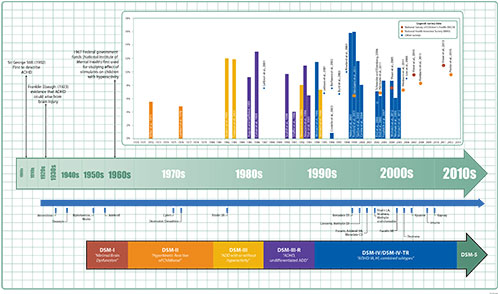