The Act Early Initiative promotes collaboration among early childhood programs in states and territories so children with autism or other developmental disabilities can be identified early and get the services and support they and their families need.

CDC works with the Health Resources and Services Administration(HRSA), Association of University Centers on Disabilities (AUCD), Association of Maternal and Child Health Programs (AMCHP) to administer the Act Early Initiative.

Act Early Ambassadors expand the reach of the “Learn the Signs. Act Early.” program and support their respective state’s work toward improving early identification of developmental delays and disabilities, including autism.

Since 2011, professionals with medical, child development, developmental disability, special education, and early intervention expertise have been selected to

See how Ambassadors and others across the nation are promoting early identification of delays and disabilities using LTSAE. 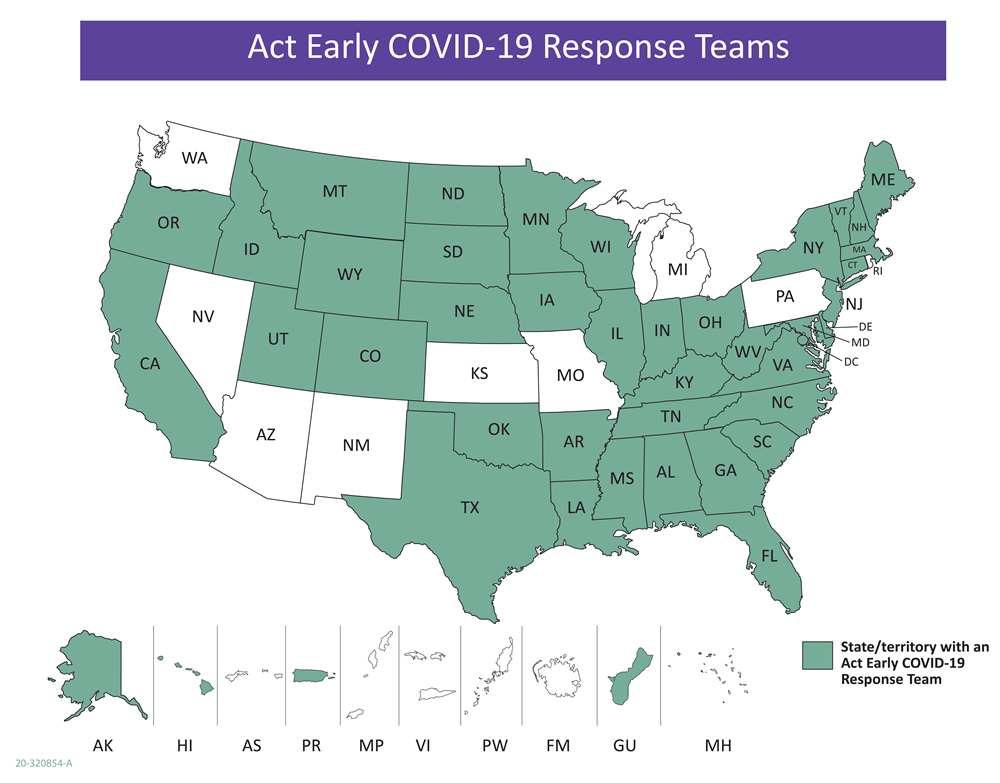 The COVID-19 pandemic and associated stressors can affect children’s development and well-being. AUCD, with support from CDC, funded 43* State and Territorial Act Early COVID-19 Response Teamsexternal icon with a two-year grant opportunity to support families and systems affected by COVID-19. This nationwide initiative is focused on support for early childhood state systems through the Act Early Networkexternal icon to support recovery and strengthen resilience skills, behaviors, and resources of children, families, and communities.

*41 teams were funded during Year Two

In 2010, with support from CDC, AMCHP began funding grants to states as part of the larger Act Early Initiative. These grants were designed to strengthen state and community systems for early identification and coordination of services for children with developmental disabilities. To learn more about the specific strategies and implementation activities, click to view the interactive resource, “Learn the Signs. Act Early. AMCHP’s State Systems Grant: Eight Years in Review.”